Television fraternity came together at the 69th Emmy Awards in Los Angeles on Sunday, September 17th. And what an evening it turned out to be with the biggest stars and celebrities walking on the red carpet dressed in glamorous outfits. Emmys are treasured by the fans and the celebrities not just because of the awards but also for the star-studded red carpet arrivals.

Here is a look at the best of the fashion as seen during the event: 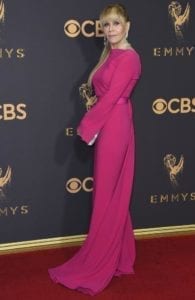 Jane Fonda, the iconic star with a career spanning decades, arrived on the red carpet wearing a long pink colored gown. She looked pretty and slim and almost unrecognizable in a new hairdo. At 79, Jane Fonda has certainly turned back the clock, it seems. She is currently seen in Grace and Frankie on Netflix. 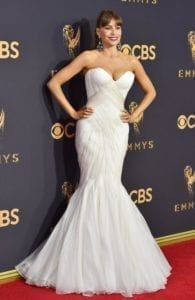 Sofia Vergara, the Modern Family star, looked stunning in this low cut, strapless white gown. She portrayed a casual look with a fringe and a ponytail. The fish like dress did well to accentuate her beautiful curves and the frills at the bottom added to the glamour quotient. She wore large diamond shaped earrings that made her look very cute and charming. 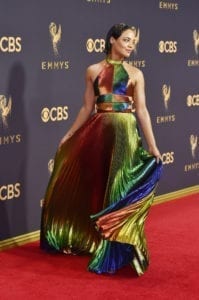 Tessa made heads turn at the red carpet when she arrived wearing this rainbow-colored dress. She wore a slick look with well-oiled hair and twirled on the red carpet to show off her dress with vibrant colors and a metallic sheen. The Westworld star certainly looked in full control of her dress at the event. 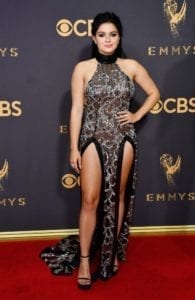 Modern Family actor Ariel Winter stole the thunder in her glittering gown with shimmer and sequencing. What made her look special were thigh-high splits that revealed her shapely legs. The black piping on both legs and the thick strap around her neck made Ariel look fabulous. 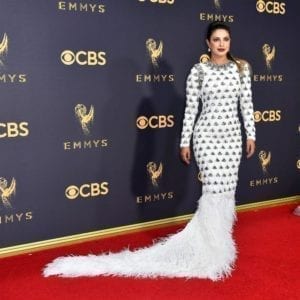 The 35-year-old Quantico star looked absolutely ravishing in her white feathered dress from Balmain. Her dress carried sequin embeds that gave it a check look. The hemline was feathered to give a very beautiful and feminine look. Priyanka Chopra was the cynosure of all eyes with her beautiful dress and the manner in which she carried it gracefully. Priyanka indeed looked like a queen on the red carpet during the event. 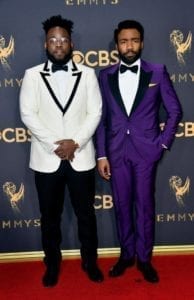 Atlanta star Donald Glover looked dashing in a violet color formal suit. His tuxedo was the most eye-catching on the red carpet this year as it was not only good fitting but also because of hemmed pants. The icing on the cake was the yellow color square that was just visible over the breast pocket on his coat. 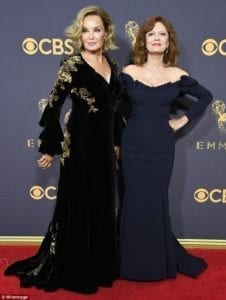 Jessica Lange, the beautiful star from the series Feud: Bette and Joan arrived at the red carpet with her co-star Susan Sarandon. Jessica dazzled everyone with her black and gold velvet dress with a plunging neckline. The frills on her long-sleeved dress made the 68-year-old star ravishing. This is the 8th time Jessica has been nominated for an Emmy award. The Hollywood legend stunned the guests at the event with a pretty smile and youthful glow. 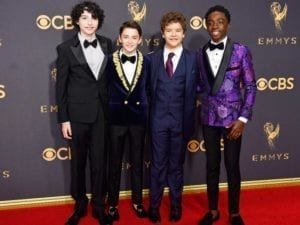 It is true that it was the ladies who stole the limelight as usual at the 69th Emmy Awards. But the young stars of the series Stranger Things caught the imagination of the audiences with their impeccable formal dresses. All four young men looked adorable in their formal suits that were all different and very graceful indeed.

No guessing who my favorite Hollywood Icon was at this year’s Emmy Awards…the incomparable Jessica Lange!