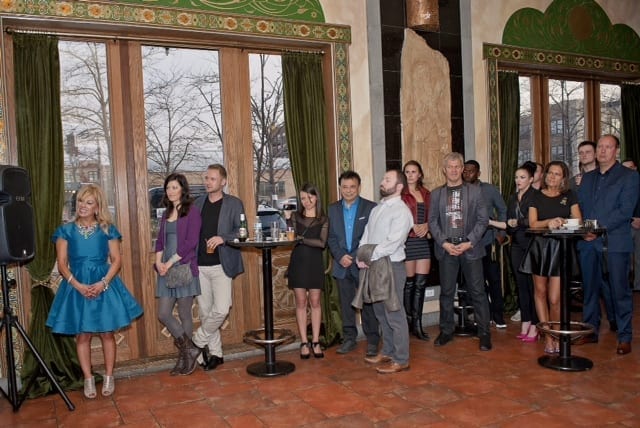 The Who’s Who of Chicago walked into the beautiful Alhambra Palace Saturday evening dressed to the nines to witness the latest collection by fashion designers Leandro Mulet, Audrone Stankuniene, Dovile Riebschlager, Nadia Dovidi, and Viktoriya Khomenets. Hosted by the Halina Foundation, the attendees to this glamorous event received more than a night of glamor. Life and legacy coach Janice Goldman took the unsuspecting guests on an emotional journey.

Several hours before the models graced the catwalk to showcase at Alhambra Palace by the fashion artists, Goldman took to the stage in front of the step-and-repeat and began to share quite a somber story about her life. The audience was captivated for a moment as she told of how she became a widow while carrying twins. Her husband passed away from cancer, leaving her without money to care for their children. The room was completely silent as she went on to explain how her late husband never removed his first wife’s name from his life insurance policy, forcing her to start a financial planning business. Goldman continued on with a timeline of events that eventually led her to empowerment and wealth.

When she finished her intriguing testimonial, the silent auction began which consisted of winning a consultation with Goldman or a trip to Mexico. Though the presentation was partially centered around proceeds offsetting cancer treatment for cancer patient Vida Dubinskiene, much of the night was heavily focused on the importance of attaining wealth in order to sustain your own life. By the time the D.J. started the music for the models to begin the show, guests were uncertain whether to applaud, cry, hire Goldman, or get a drink from the open bar.

While many will undoubtedly hire Goldman for her expertise in the world of financial freedom and self-esteem, it is unknown how much revenue was raised that night for Dubinskiene’s cancer treatment. As the event took many of its guests down memory lane, revisiting loved ones who had passed away from cancer, the room was suddenly brightened when the first set of models graced the stage. Dressed in adorable couture, a group of six-year-old kids brought light to a heavy cause. The evening was a night to remember, taking every human being that attended the event on a journey of self-reflection, mourning, and a celebration of life.