Shakespeare said, “All the worlds a stage,” and that being said, you can always expect to find Irene Michaels front and center! She is a true renaissance woman who has a golden touch and the talent to succeed at all of her ventures, including her philanthropic work and best-selling book. Michaels is currently a featured performer in “The Our House Band.” The band’s sell-out shows are produced by multiple Tony Award winner, Arny Granat.

This lady boss is also a top model and fashion icon in her hometown of Chicago who turns heads everywhere she goes.

She co-designs her look with couturier Michael Wesley White, whose clients include Diana Ross, Neil Armstrong, Chaka Khan, and others. Those in the know, including many international stars and the chicest of the social in-crowd, never miss her popular website ‘I On The Scene; if you want to know what’s happening, ask Irene.

Ms. Michaels has since the age of 11, and this year she decided to fulfill her lifelong dream of being a recording artist. She always starts at the top, gives any project her all, and works only with the best team available. Rachael Cain, the legendary Queen of House Music and owner of the major label of the genre, TRAX Records, caught an Our House performance and offered Irene a recording contract on the spot. Cain also decided to produce the project personally. She asked world-renowned music producer Joe Smooth, known for many seminal hits, including the smash “Promised Land,” to create and mix the music.

Esteemed publishing group Raleigh Music chose their Elvis cut “Devil In Disguise” for Irene to fit her cool swagger and ability to deliver the Presley style. Likewise, “Hush Money” hits a home run for her since the subject is timely, you hear that the woman has vocal chops, and there’s no doubt that Michaels’s sophistication puts her in complete charge. 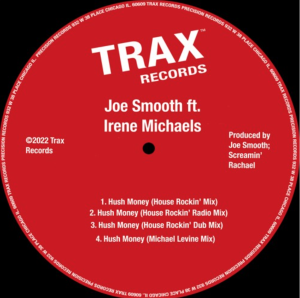 One of the most unique releases of the year, ‘Hush Money’, pairs the incomparable talents of Chicago house music legend Joe Smooth with dazzling newcomer Irene Michaels, whose show-stopping vocal debut adds to her long and storied career as a pioneering entrepreneur, top model, Chicago fashion icon and best-selling author. Effortlessly blazing trails in every field that she enters, Michaels emerges as one of most intriguing figures on today’s music scene. At 75 years young, she has made a habit of shattering expectations, all the while providing an inspiration to women everywhere, while providing a playful and much needed riposte to our youth-obsessed culture. Written by buzzworthy Canadian country trio The Heels, and released on the legendary Trax Records, ‘Hush Money’ is a soulful and propulsive funky house concoction with an unmistakable Broadway flair. Co-produced by Screamin Rachael, who was dubbed ‘the queen of house music’ by Billboard Magazine, this release also contains an alternate mix by acclaimed soundtrack composer Michael Levine, rounding out one of the most distinctive and idiosyncratic collaborative releases on the dance music scene today. 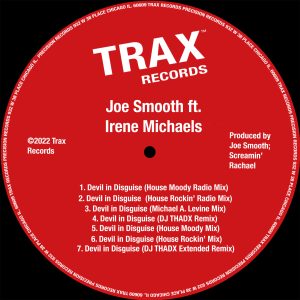 Just in time for Halloween, two Chicago-area icons return with their second superlative collaboration: a sleek house music version of the Elvis smash ‘Devil In Disguise’. One of the true pioneers of dance music, Joe Smooth transforms the 1963 classic with two unique takes: a laidback deep house ‘moody’ mix and a more stomping uptempo ‘house rockin’ mix, while vocalist and renaissance woman Irene Michaels adds her inimitable sass to the proceedings.

Effortlessly blazing trails as an entrepreneur and best-selling author, Michaels emerges as one of most intriguing figures on today’s music scene. At 75 years young, she has made a habit of shattering expectations, all the while providing an inspiration to women everywhere, while providing a playful and much needed riposte to our youth-obsessed culture.

Rounding off the package are additional remixes by acclaimed soundtrack composer Michael A. Levine and newcomer DJ THADX.