Miles Davis: Birth of the Cool The Ultimate Portrait of an American Icon

In the most recent edition of Robert Dimery’s massive and popular book 1001 Albums You Must Hear Before You Die, Miles Davis is one of the artists with the most albums. Only legendary artists like David Bowie, The Beatles, Bob Dylan, and The Rolling Stones have more records on the list. Along with Stevie Wonder, Davis is the African American artist with the highest number of mentions.

And YES, race was always an important factor in the life of the iconic jazz trumpeter.

The fact that Birth Of The Cool, Bitches Brew, In A Silent Way and Kind Of Blue appear in the most recent edition of the most consulted music reference book of the last 10 years, is just the most recent demonstration of Davis’s gigantic legacy.

Miles Davis is considered one of the essential musicians of the 20th century, whose contributions to jazz music continues to impress to this day. To make Davis’s place in history clear, musical writer and biographer William Ruhlmann said it best: “It can even be argued that jazz stopped evolving when Davis wasn’t there to push it forward.”

However, the life of Miles Davis was also plagued by controversies, obstacles, and erratic behavior. Alcoholism, drug addiction, family instability, and domestic violence were constant elements in his narrative. And those factors, for better or worse, forged the genius art and constant experimentation of the native artist of Illinois.

All that complexity is intended to be portrayed in the new documentary film Miles Davis: Birth of the Cool, which just premiered at the Sundance Film Festival.

However, this is not the first time that a film has tried to cover the story of the emblematic musician.

In 2015, renowned actor Don Cheadle made his directorial debut with a Miles Davis biopic entitled Miles Ahead, in which he also starred as the iconic trumpeter. The movie was well-received by the critics, with the majority praising the work of Cheadle in front and behind of the camera.

However, both projects failed to really capture much of Davis’ essence. Miles Ahead ended up being more of Don Cheadle’s artistic showcase than an accurate and extensive narrative about Davis’ life. The Miles Davis Story undoubtedly offered a lot of precious information but ended up focusing almost exclusively on the technical-musical aspect of the musician, offering very broad brushstrokes about his intimate life.

So, the question arises: Is it really necessary to examine the artist’s personal life in order to have the full picture of his legacy? In Miles Davis’ case, absolutely.

Of course, the focus can’t be in the cheap sensationalism of detailing his days as a pimp to get drug money, or his multiple romantic breakups motivated by his violent temper. A great documentary has to try to understand, for example, the genesis of his cynical and self-destructive behavior, or the way racism shaped his art.

All that, without absolving him from his mistakes. That’s a huge challenge. But judging from the early reviews, that’s precisely what director Stanley Nelson has achieved with Miles Davis: Birth of the Cool.

Variety has claimed that “any documentary about Miles Davis that really wants to take him all in has to grapple with each of those dimensions — the lyrical jazz genius, the midnight pop star, the drugs, and domestic violence, the stubborn inner light — and demonstrate how, exactly, they fit together. Birth of the Cool does just that.”

The Hollywood Reporter’s reaction was also positive: “Sundance vet Stanley Nelson offers a documentary broader in chronological scope than his most visible films, celebrating a musician whose career was not just long but constantly transformational.”

Stanley Nelson, in addition to being a black artist himself, has justly built a reputation as a chronicler of the African American experience of the modern era. His extensive experience as a documentary filmmaker focusing mainly on issues like racism, segregation, and the civil rights movement includes titles such as The Black Panthers: Vanguard of the Revolution, The Black Press: Soldiers Without Swords, Tell Them We Are Rising: The Story of Black Colleges and Universities and Rise Up: The Movement that Changed America.

Certainly, it looks like there are very few people better qualified to craft an integral portrait of a musical genius brewed in the middle of racial segregation. And the official synopsis highlights that needed social emphasis: “Despite the indignities of America during the time of segregation, nothing was going to stop Davis from realizing his dream: to create a new form of musical expression”.

Miles Davis revolutionized the music world. That gigantic achievement took its toll on his other facets of friend, husband, lover, and father. The least we owe him is a fair and contextualized glance at his life.

Miles Davis: Birth of the Cool seems to have achieved just that.

Special thanks to Robert Davis & Robert “Baabe” Irving III I was able to attend the screening of Miles Davis: Birth of the Cool and the Live Jam with Miles Electric Band while I was on location at Sundance Film Festival. 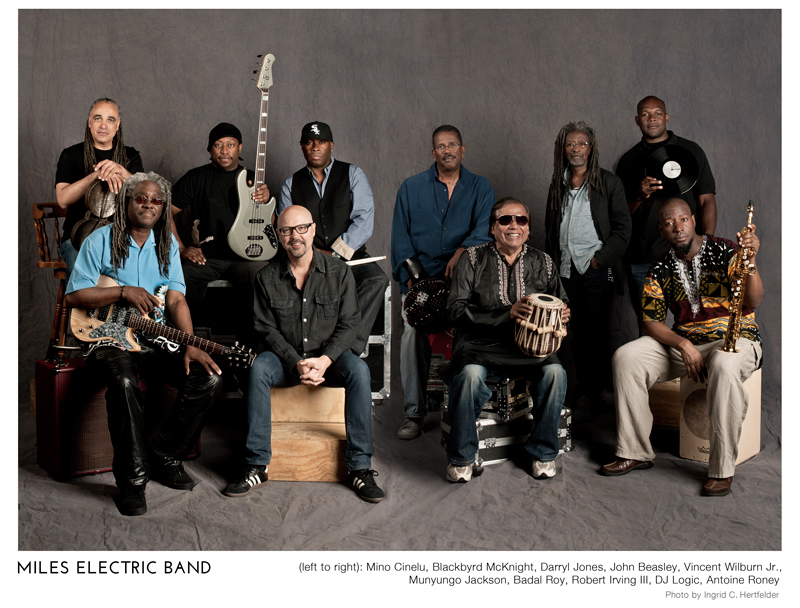 2 comments to " Miles Davis: Birth of the Cool The Ultimate Portrait of an American Icon "