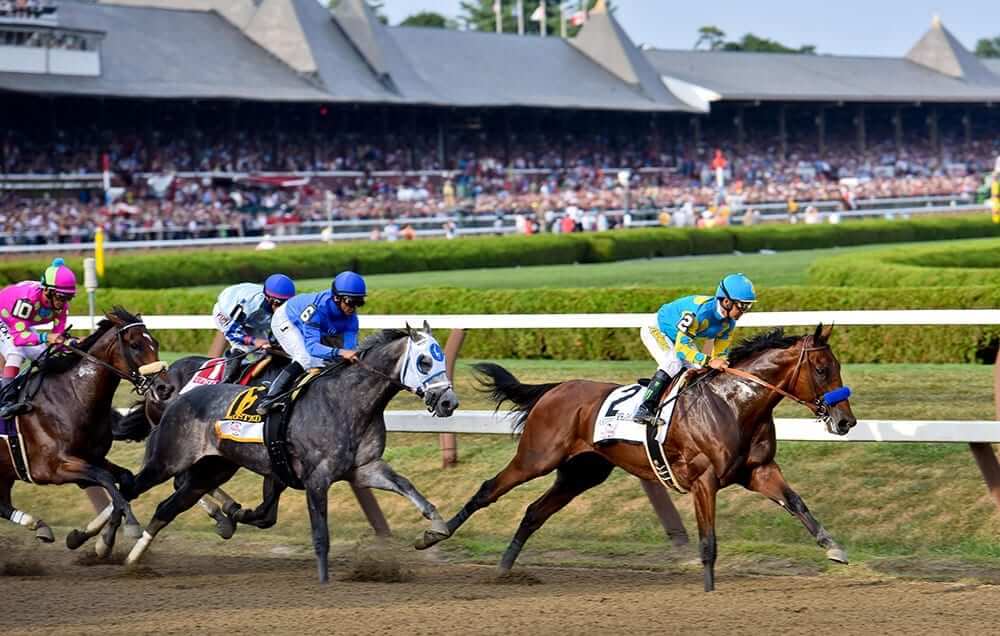 The thoroughbred is the star of the Summer at the Spa, just as the New York City Ballet rules at SPAC. The horses are the racetrack’s life heartbeat. The task here is to list the best six of the top race horses to ever step on the track at Saratoga. This is not easy; simply because the best horses have been congregating at the Spa since 1863. These are, in my opinion, six of the finest racehorses to run at Saratoga within the last 25 years.

American Pharoah finished second in Travers. While he did not succeed at the Spa; he won the Triple Crown. That win triggered memories of the first year I ever watched horse racing, at the point when American Pharaoh crossed the finish line to stamp his place in history, I could sense a spike of power in the air. American Pharaoh is trained by Bob Baffert. Just like all other sports activities, horse racing is a team effort. American Pharaoh is certainly a talented horse, favored with speed and suited for racing. In any case, he is the kind of horse that beams with qualities of winning.

Hall of Famer (class of 2014) won Schuylerville and Spinaway as well as a success from Gofor Wand. Ashado is a two-time winner who won 12 of 21 lifetimes starts with profit of more than $3.9 million from 2003-05. Ashado was trained by Todd Pletcher in partnership with Starlight Stables, Paul Saylor and Johns Martin; she won 7 Grade 1 stakes as well as the Eclipse Honor as best 3-year-old filly of 2004 and also top older mare of 2005. Ashado made her eye-popping debut on June 18, 2003 at Belmont Park, winning by 7 lengths with John Velazquez in the saddle. She took the Grade 2 Schuylerville and Grade 1 Spinaway at Saratoga, and then finished 3rd in the G1 Frizette at Belmont. Ashado ended the calendar year with a nose win in the Grade 2 Demoiselle at Aqueduct.

Only a few were quicker than this Hall of Famer Azeri and also 4 time Eclipse champion (Horse of the Year, 2002), Azeri trained by D. Wayne Lukas made her very first start on Nov. 1, 2001, at Santa Anita ; she was straight away announced as racing drive, by winning 6 lengths under Mike Smith, who rode her for 18 of her 24 lifetime starts. Showing that that maiden victory was no fluke, Azeri won all of her subsequent two starts by 3 lengths before finishing 2nd in her very first stakes effort, the Grade 2 La Canada.  Her victories came over 5 different tracks, and her record of 8 wins along with a 2nd in 9 starts in 2002 earned her Horse of the Year honors.

On his route to his 2nd successive Horse of the Year honor, Curlin stopped by the Spa to win the Woodward. His achievements on the racetrack were amazing. As a 3-year-old, he placed in the Kentucky Derby-G1, won the Preakness-G1, and then finished 2nd by a short head in the Belmont-G1 to Rags to Riches after one of the most exciting stretch duals the game has ever watched. Then he finished the year with wins in the Jockey Club Gold Cup-G1 and Breeders’ Cup Classic-G1. As a 4-year-old, he visited Dubai and won the world’s richest race by a simple 7 3/4 lengths, and then threw in wins in the Stephen Foster-G1, Woodward-G1 and Jockey Club Gold Cup-G1 (once again), surpassing the North American Earnings record set by the great Cigar. Curlin was trained by Steve Asmussen.

Bernardini, won the Preakness, the Jim Dandy, the Travers, and the Jockey Club Gold Cup en route to Champion 3-Year-Old Male honors and also Won the 2013 Grade 2 Pan American Handicap with Twilight Eclipse, he set a world record for 1 ½ miles on the turf (2:22.63). Bernardini has rolled to six straight victories by a combined 40 lengths. The bay stallion’s grandsire was Seattle Slew. Bernardini was trained by Tom Albertrani.

Fourstardave won a Saratoga race each year from 1987-1994. Raced 21 times at Saratoga in career, in which he won nine of them. Fourstardave maybe is the most well-known Spa horse ever, affectionately referred to as The Sultan of Saratoga.  The New York bred chestnut gelding was trained by Leo O’Brien.  He died of a heart attack in October 2002 at the age of 17 while preparing for a parade of retired New York bred horses at Belmont Park.