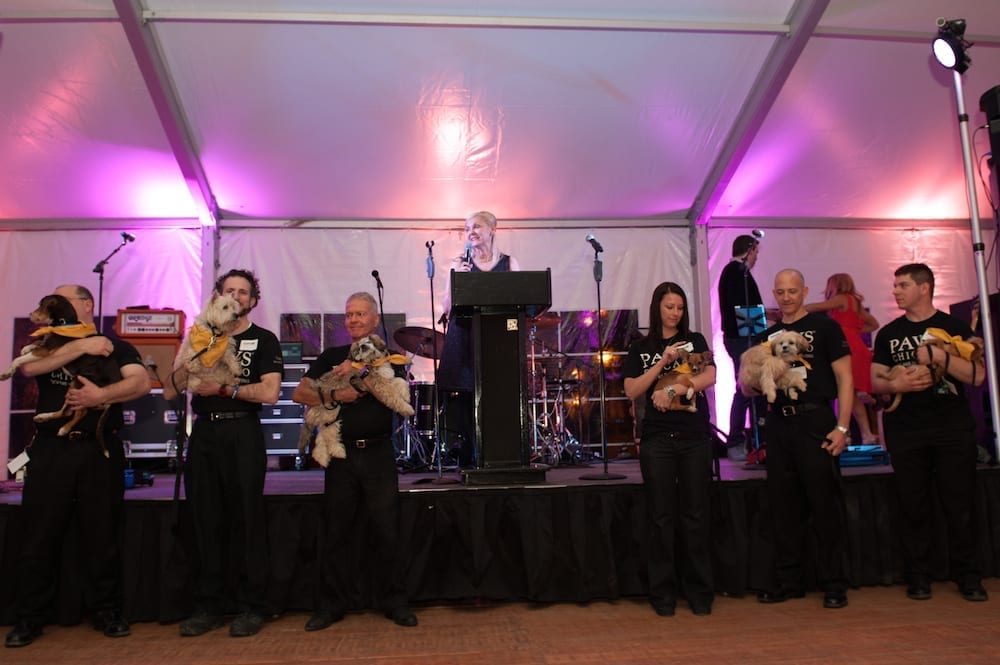 Governor Quinn was the guest of honor at the fundraiser and received an award for his extraordinary leadership in animal welfare through advocacy and legislative reform.

This dog-friendly evening included something for everyone.  Guests mingled with dozens of adoptable PAWS dogs and cats while sizing up fabulous silent and live auction items, had caricature portraits drawn by for them by Darick Maasen and pet readings through the animal communicator, Alicia Halloran.  They enjoyed an open bar, dinner, and dancing, as well as a full menu of terrific desserts provided by Chicago cupcake boutique, more. Meanwhile, the lucky pups in attendance indulged in a doggie buffet and “pupcakes” from Swirlz.  At the end of this night, guests were treated to a dog-themed “goody box”, provided by Presenting Sponsor, The Professional Moving Specialists.

The live auction was a true event highlight because of the unique auction items, which included; a behind the scenes experience on HGTV’s “Kitchen Crashers”, a Sundance Film Festival 2015 Package, and a five-night stay in St. Maarten.  The evening was punctuated by an energetic round of paddle-raising from guests, who pledged over $20,000 in donations to save the lives of homeless animals.

“It is inspiring to see so many people who are passionate about helping Chicago’s homeless animals,” said PAWS Chicago founder and chair, Paula Fasseas. “It is through their support at events like Animal Magnetism, and support from our animal-loving community, that PAWS Chicago is able to continue our life-saving work.”

In total, more than $130,000 was raised over the course of the evening, making this the most successful year to date for this annual fundraising event. All of the proceeds will go directly to saving the lives of Chicago’s homeless animals through the work at PAWS Chicago.

Animal Magnetism was emceed by Brotha’ Fred from 103.5 KISS-FM and the HGTV Network’s Alison Victoria, who also co-chaired the event, along with PAWS Chicago Professional Board members Courtney and Eric Weiler.