Stepping into the boxing ring for the 7th time and stepping on to the stage for the first time since 1977, Sunday night was magical for Sylvester Stallone, as the 73rd annual Golden Globes Awards show got underway, presented live from the Beverly Hilton Hotel on NBC.

Stallone reprised his role as Rocky Balboa, only this time his character was a coach and mentor to a much younger talent: actor Michael B. Jordan in the role of Adonis Creed, the son of his former rival, Apollo Creed. From the very beginning, Stallone took the pressure off of Michael by clarifying: “You shouldn’t compare yourself to what I did 40 years ago, because this is your movie.” The end result was a significant film that enabled Stallone to capture the award for Best Supporting Actor in a motion picture. 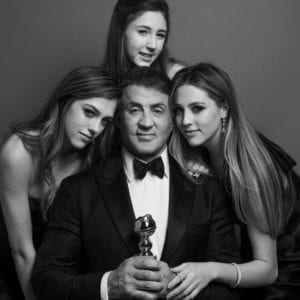 This magnificent award was especially meaningful for Stallone at this time for two solid reasons: Primarily because it honored the legacy of his late son (Sage Stallone) who starred in 1990’s “Rocky V” as Rocky Balboa Jr. For Stallone, the frosting on the cake was the recognition by his family – his daughters “could finally understand he was a bona fide movie star.”

Clearly, Sylvester Stallone as an actor is not resting on his laurels and shows no signs of slowing down. This newest Golden Globe achievement is merely an indication that he is constantly striving to perfect his skills on screen and not just trying to sell tickets to his loyal fans for another boxing movie sequel.

For more information about Sylvester Stallone, make sure to visit his website here.