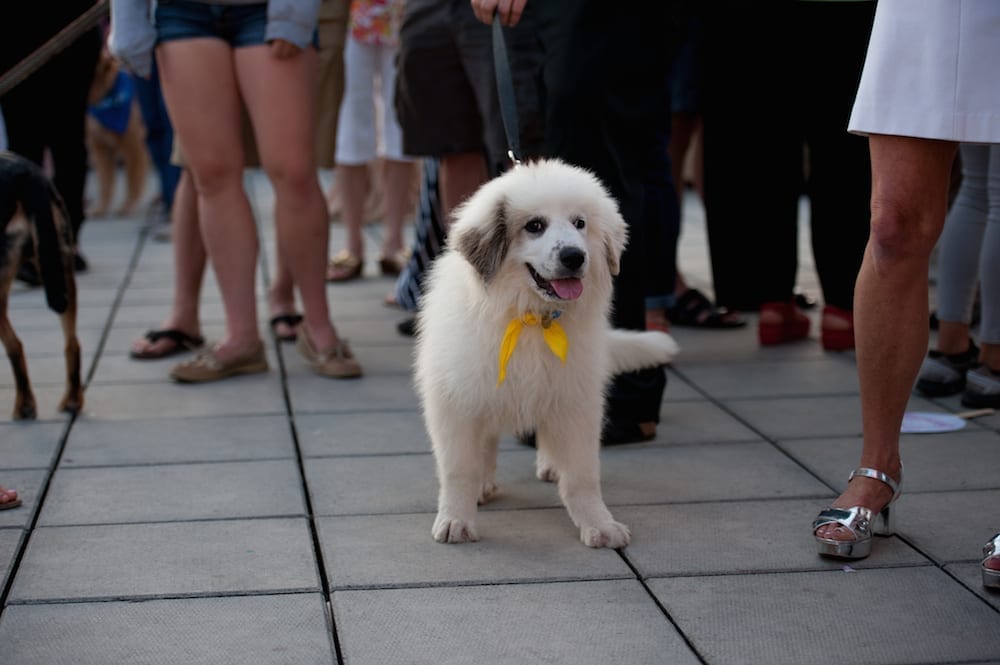 The beach party was alive with the sound of barking (at North Ave.) as 400 dog enthusiasts gathered to celebrate man’s best friend and raise funds which are critical for the continuing success of PAWS Chicago; an organization that is dedicated to raising awareness about the overpopulation of dogs and cats in Chicago.

The euthanasia of homeless pets in Chicago has been reduced by a significant 70% since the founding of PAWS in 1997; however, Founder Paula Fasseas and her staff are devoted to overcoming this challenge until they reach a perfect 100% success rate.

Last year alone, Paws was able to find owners for 5,872 homeless pets and delivered 17,767 spay/ neuter procedures by utilizing the innovative Gus Spay – Neuter Van, along with the Lurie Clinic. These outstanding accomplishments have propelled Paws to the top 1% ranking of charities, as conducted by Charity Navigator, the country’s biggest independent evaluator.

Every accommodation was offered to these 4 – legged companions at this year’s celebration: a dog buffet, “paw-dicures,” luxury treatments in the Pup Deck, and even miniature pools were on hand to keep these canines cool and comfortable. At the same time, the usual comforts were provided to their owners and all guests who attended this honorable event: endless tables with quite a variety of salads, hamburgers, hot dogs, pizza, fruit, desserts, etc. Not to mention three bars offering ice-cold cocktails, beer, and even Pina Coladas.

Under a pristine white tent were dozens of silent auction items, the most prestigious of which raised an astonishing $12,500. Chef Rich Mancini offered an exclusive dinner for up to 10 people when a bidding war started between two guests, resulting in $12,500 being raised when Mancini decided to provide the same dinner to both parties. An enviable “meet and greet” experience with three-time Grammy award-winning Zac Brown Band raised an impressive $6,500 from Corey Marchetti.

In the spotlight on this special evening was Frankie the Sheepdog and his owner, who pledged a tremendous $11,000 (matching gift) to further the cause of “Heal the Helpless Animal Fund, ” a vital program which covers the cost of sick or injured pets at PAWS.

Murray and Anne Marie Pertz are credited with a generous bid of $5,000, allowing them to have their dog as the official logo for next year’s party. Every dollar raised by this wonderful event is significant, and not to be overshadowed are the $500 donations by Burt Van Gorder, Godiva and Frankie Block, along with Mookie Styles.

Three adorable puppies had their dream come true at this special event: Lily the Golden Retriever, Gandolph (a Great Pyrenees,) and Desi the Shih Tzu all left the party with proud, new owners.

Sponsored by Celebrity Cruises, this year’s beach party was the most prosperous in its 12-year history, as country music personality Lisa Dent (from radio station U.S. 99) delighted the capacity crowd (as emcee) long into the night.

Congratulations to co-chairs Kim Gleeson, Cheri Lawrence, and Christine Mallul for their outstanding efforts, along with PAWS Founder Paula Fasseas, whose never-ending work for the PAWS organization will never be forgotten.