Emotions flew out of the building this time as was promised by the 51st Annual CMA Awards. The yearly gala pulled out everything available in their arsenal to make it a memorable night as they planned by bringing all of the biggest stars under the same roof. The night was filled with glamour and music and last but not least, celebrations. No one would doubt the guaranteed fun ride because of what happened last year when the big names of the music industry like Garth Brooks, Pink and many others brought colors to the evening with their signature styles.

As always the stage was covered with the presence of Brooks and Alan Jackson. Too bad that Zayn Malik did make an appearance but his ex-band member, Niall Horan joined Maren Morris to light up the performances. The all-star famous Pink lit up the magic with her voice. With more and more newer names on the rooster, the 51st CMA Awards gave us different awards in multiple categories and the nominees kept the watchers and attendees alike on the edge of their seats. This year’s show brought us several music genres not just country in one place for one night!

This year was not without upsets, for instance, the fact that only male performers were nominated for Entertainer of the Year, which Garth Brooks took for the second year in a row. And that Miranda Lambert was nominated in so many categories, but only came away with Female Vocalist of the Year.

There were not any surprises in the category of the hosting as the all amazing duo of Brad Paisley and Carrie Underwood made their appearance again which marked their 10th consecutive for the very event itself. And they did mix it up a bit this year, but just in case if you were wondering who presented the awards then another very special list of people that included the famous race car driver Jimmie Johnson, supermodel Karlie Kloss, actress Lea Michele, and renowned director Tyler Perry were all present. 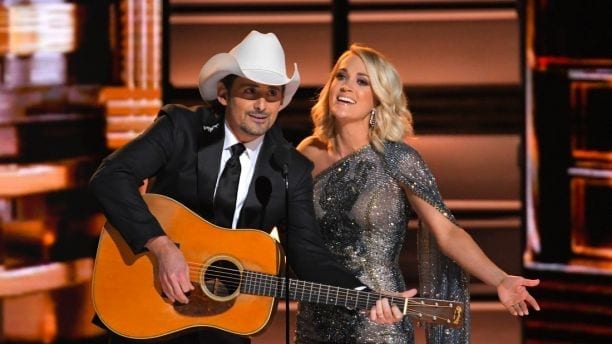 It was a great night of entertainment from the opening number right through the entire show.  I would be remiss if I left out what turned out to be a momentous opening number, this year’s message was healing and and instead of a huge spectacle that was being teased, the opening left Eric Church alone on a half-lit stage singing Amazing Grace, the message could not have been any clearer after what country music has been enduring since the killings at The Harvest Festival in Las Vegas.

A complete list of winners can be found here.