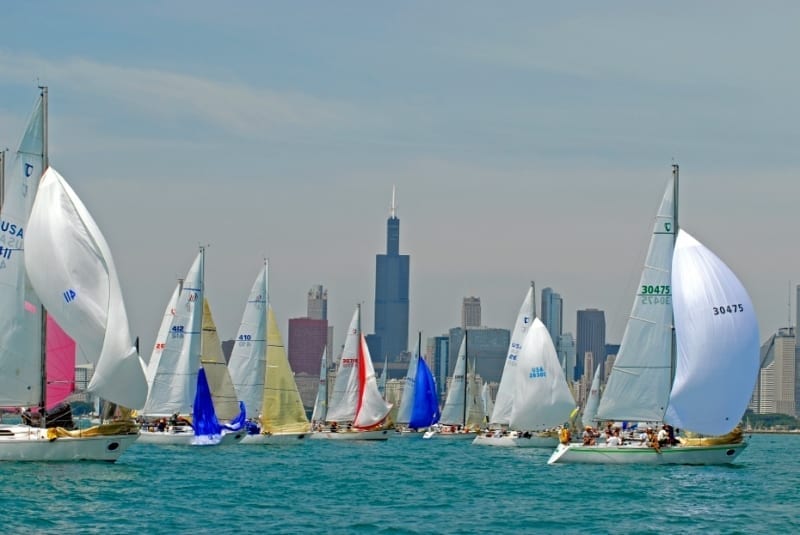 A 104-year-old maritime tradition was proudly renewed last week as sailors gathered in Chicago to start the 333-mile race to Mackinac Island, Michigan. The Chicago Yacht Club Race to Mackinac presented by Veuve Clicquot champagne is considered one of the oldest and highly regarded freshwater sailing races in the world. The crashing Lake Michigan waves beckoned seasoned sailors as the 104th annual race commenced with week-long festivities leading up to the official start on Friday and Saturday, July 20 – 21st.

Known as “The Mac,” this particular race accommodates an estimated 3,500 sailors aboard 350 boats. This large, impressive collection of sailboats carried on the annual “Parade of Boats” tradition whereby they cruise in front of Navy Pier on their way to “check in” before reaching the Chicago Yacht Club starting area. “Ashore Thing” was the official name of the boats viewing party, sponsored by Michigan Ave. Magazine and Veuve Clicquot champagne.

The exclusive Monroe St. harbor served as The Chicago Yacht Club race’s headquarters, as an exciting week of celebrating began on Wednesday night with a “Family and Crew” dinner party. A “Warning Gun” party was held on Thursday, whereas the “Pre – Race Kickoff” party took place on Friday, right after the Skippers Meeting and Weather Briefing.

A commonly asked question is: “How can small boats compete against large boats in a race like this ?” Answer: Boats are handicapped by a rating system which relies on mathematical statistics to predict how fast they could be sailing under different weather conditions. Assigning the ratings to the elapsed time for each boat determines who the winner is. No prize money is awarded to the winners because the race is an amateur event, so the sectional winners instead receive a flag and a plaque. Overall winners have their names engraved on trophies which are then proudly displayed at the Chicago Yacht Club. Also, winners of each section and division receive a unique gift: a bottle of Veuve Clicquot champagne with their names etched on it.

After 38 hours of grueling weather conditions, it was Realt Na Mara, a J109 sailboat owned by Tom and Joe Londrigan who prevailed to be the overall winner, finishing in an official time of 38 hours, 28 minutes, and 45 seconds. Two significant past winners include Roy Disney, (who skippered Pyewacket) and set the monohull record in 2002 with a time of 23 hours, 30 minutes, and 34 seconds. World renowned adventurer Steve Fossett (aboard Stars and Stripes) set the multihull record of 18 hours, 50 minutes, and 32 seconds in 1998. (Between 40 to 60 hours is the usual time it takes most of the fleet to finish the race.)

Festivities on Mackinac Island included a “Porch Party” on Sunday at the Grand Hotel and on Tuesday with Chicago Yacht Club’s  “Sailor’s Celebration,” where the winners (Tom and Joe Londigran) were honored.

Congratulations to all who participated in this magnificent Lake Michigan sailboat race and kept the spirit of a 104-year-old tradition alive and proud.

Special acknowledgment to some of the women who helped make this event a huge success: