Delilah Wallenda: The Beauty on the Wire 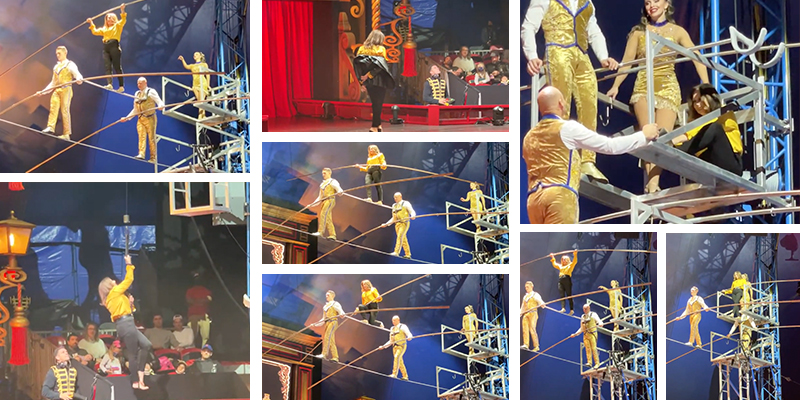 Delilah Wallenda was born in Sarasota, Florida on December 18th, 1952 into the family commonly referred to as the first family of the air. She grew up watching her family perform some of the most astounding feats on the highwire and dreamed of doing the same one day.

“My life has always been intertwined with what it means to be a Wallenda. I walk the wire because it’s in my blood. It’s what I do and what my mother and grandfather did before me. Those who care as much as I do must fight. The circus tradition is in its last frontier, but I won’t give up. I have to preserve our heritage and our future.” – Delilah Wallenda.

Few have the courage to climb tall ladders without the fear of falling or losing their footing. And even fewer can pull off the heart racing feats of a long generation of highwire acts.

Delilah fulfilled her dreams and performed on the highwire for decades. Her children Nik and Lijana Wallenda continue the family tradition.

Delilah’s Return To The Wire

Nik Wallenda has set several world records and owns 10 Guinness World Records. And for the first time in the Wallenda family’s 200 year history, Nik is heading the revived production of The Big Apple Circus.

He titled it “Making The Impossible, Possible!” and partnered with a team of live entertainment mega producers from live music, Broadway, and the circus world to make the show better than ever. These entertainment geniuses are Co-Producers, Michael Cohl & Arny Granat, and Director/Choreographer, Phillip Wm. McKinley.

It was my good fortune that I got to witness the revival of an iconic New York City show, I attended The Big Apple Circus on the second night of its resurrection, November 12th. Everything about the show was AMAZING, and I was particularly excited about getting to see Nik perform live in person and meet him after the show, as I have been actively following his career for some time now.

What I did not realize is that I was about to be completely captivated by his mother, Delilah. Nik announced she was back on the wire after hip replacement surgery and Delilah came out of the audience and ascended onto the highwire.

Backstage we immediately bonded over what else – animals; in particular dogs and birds. However, there was also something so intriguing and inspiring about her that I just immediately wanted to share it with the rest of the world – and so I am!

The History of The Flying Wallendas

Delilah Zaira Diana Zoppe’s arrival was a joyous time for the entire family, the circus world, and even acknowledged by Hollywood producer Cecil B. DeMille with a congratulatory letter to her parents.

Delilah’s story starts from the roots. The Flying Wallendas was the name given to the stunt performers of the Wallenda family who performed high wire acts without a safety net.

The circus act was put together by Karl Wallenda, Delilah’s grandfather. Karl developed some of their most impressive acts and was one of the most famous Wallenda family members.

In 1962, the flying Wallendas experienced a great tragedy while performing the seven-person chair pyramid developed by Karl. The frontman on the wire, Dieter Schepp, faltered, and the pyramid collapsed, leading to the fall and death of Karl’s son-in-law, Richard, and nephew Dieter Schepp. Karl himself injured his pelvis and the rest members of the act suffered great injuries too.

But Karl was back to performing the very next day. He worked with a smaller group and did solo acts until 1978 when he fell to his death during a promotional walk in San Juan, Puerto Rico.

Nik and his mother completed the same walk on June 4, 2011, Delilah mentioned to me that this was a particularly emotional walk.

The Beauty On The Wire, Delilah

As far back as Delilah could remember, she had traveled the world of the circus with her family, led by her grandfather Karl.

Growing up and watching her relatives perform, Delilah dreamed of one day standing at the apex of that human pyramid her family members risked their lives to build on the highwire.

When she was old enough to train for the act (about 6 years old), Delilah quickly realized performing on the highwire required more than focus, physical strength, and courage. It also required the desire to show audiences what the human spirit could achieve.

She learned from her grandfather while in his troupe and continues to share her remarkable life story of performing alongside her famous family.

Even after tragedy struck the Wallendas, Delilah continued to perform on the highwire, exciting audiences and fulfilling the Wallenda mission, until “retiring from the wire” in 2019.

Delilah is married to Terry Troffer who has also walked the highwire for over 38 years. Their children Nik and Lijana Wallenda continue in the family tradition and Nik has stuck to his mother’s maiden name as his last name to represent this progression, now in the seventh generation.

In 2018, Delilah had back surgery and a hip replacement but insisted she would continue to scale the heights. And so she did!

Delilah returned to her passion on the highwire for the Reenergized, Reimagined, And Reinvigorated, Big Apple Circus.

Today Delilah shares her remarkable stories of performing alongside her famous family and through perseverance and determination how to achieve what seems impossible. Delilah is available for speaking engagements for your organization. From business events, library associations, book clubs, and educational systems she has shared her stories to a wide spectrum of groups and is ready to inspire others through her messages for booking information: https://delilahwallenda.com/#speaking

ST: What is the best piece of advice you’ve ever been given?

DWT: Press Forward, Follow Your Dream & The Show Must Go On

ST: What breed of dog would you be?

ST: You have to sing karaoke, what song do you pick?

DWT: You do not want to hear me sing!

ST: What is your favorite scent?

ST: What is your favorite flower or plant?

ST: What do you put in a vase to keep cut flowers fresh?

DWT: A few drops of Vodka – it minimizes the growth of bacteria in the water and provides nourishment to replace what the flower would have gotten had it not been cut.

For tickets to The Big Apple Circus: CLICK HERE

1 comment to " Delilah Wallenda: The Beauty on the Wire "