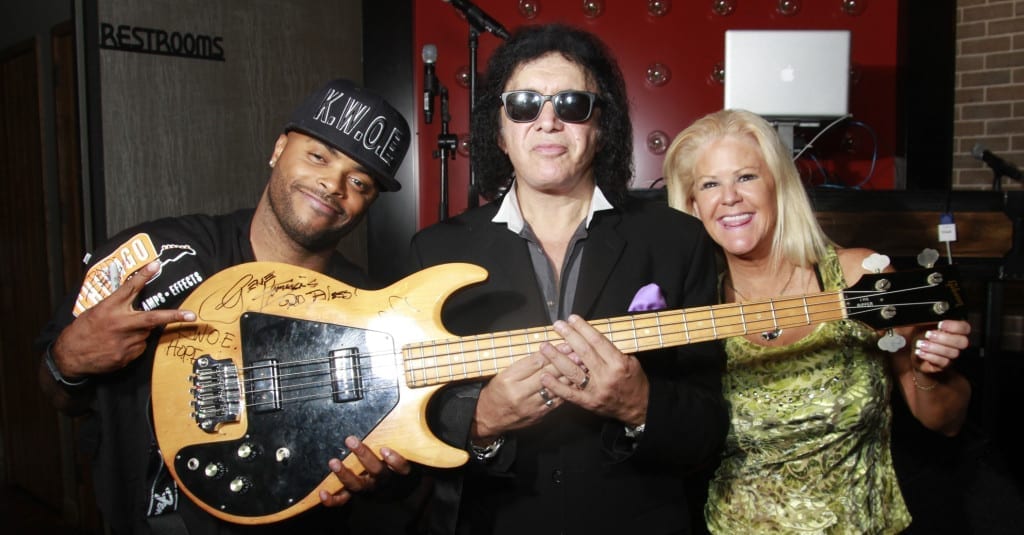 As a rock legend of the 1970s, entrepreneur, and philanthropist, Gene Simmons has proven to be a multi-dimensional, intriguing character who recently visited a downtown nightclub for a unique purpose: to celebrate Changing Lives with Sheila Lamb of Matt Lamb’s Umbrella for Peace Campaign and K.W.O.E.

After accommodating the media with numerous interviews and an excess of adoring fans with pictures, autographs, and questions, Gene Simmons took to the stage at American Junkie at 15 W. Illinois St. Along with hip-hop artist K.W.O.E. (Kareem of Flow Entertainment) Gene addressed the crowd with a significant message of “… giving back to society.”

In coordination with his daughter Sophie, Gene directly contributes his time and money to Sophie’s Place, supporting children who are victims of abuse in Surrey, British Columbia. As a successful recording artist, Kareem (of Flow Entertainment) started an innovative organization: Helping Other People Excel (H.O.P.E.) this summer, which attempts to inspire and motivate youngsters to keep off the city’s streets (out of trouble) and channel their energy in a positive direction.

As a youth who was negatively influenced by his environment, Kareem is “living proof” that things can change and lives can be re-directed in a productive, constructive manner if kids are given a chance to change and are guided down the right path.

The 3rd integral part of this wonderful evening was Sheila Lamb, daughter of creative genius Matt Lamb, who initiated Matt’s Umbrellas for Peace Campaign after Sept. 11, 2001. The goal of this project was (and remains) to help individuals through the process of coping with grief by suggesting they paint on umbrellas. Ideals of peace, hope, love, and intolerance are raised with this therapy; instead of violence and war.

These three significant pillars of society are inspiring positive changes in their own special ways; whether it’s through artwork, music, speeches, or assistance with day to day living, and are truly living proof that the lives of our youth can be successfully developed if given a chance, shaping a brighter future for everyone…