Richard Rose, a popular and compassionate author, comes from a middle-class family in Kokomo, Indiana. After three-and-a-half years in the U.S. Army, he came to our beautiful city, Chicago, where he has worked as an investment advisor. Always a writer, Mr. Rose became more seriously involved in writing when he moved here.

Why did you pick Chicago after living in Germany? I was living in Germany, courtesy of Uncle Sam, most of the time as a German linguist and border guard on the East/West border. After my discharge, I went back for a year at The Free University in Berlin but eventually migrated to Chicago.

I understand you majored in English in college. How did you go from an English major to an investment advisor? I needed to make a living (laughter). I was in New York for about a year before moving to Chicago and took courses at The New York Institute of Finance to enable me to pass the exam to become an investment advisor. Got to Chicago and didn’t have a job until I was hired by the office manager of a major investment firm. I’ve been with the firm ever since, now as a vice president- investments. During this time I wrote and announced market reports on TV and radio for many years. 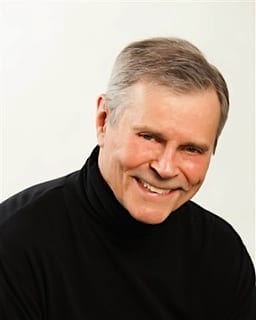 How long have you been writing? Actually, as I think back on this, I started as a kid (chuckles) in grade school doing comic strips with my older brother, Charles. We drew comic strips, created superheroes and you know, that involves writing because you have to have characters, dialogue and a plot, although most of the plots were absurd. In high school that became kind of boring, so we started doing satires on some of the local people in Kokomo like the mayor, high school principal and other pillars of the community by making them villains and killing them off in gruesome but amusing ways. Strictly for laughs. When I got to Wabash College, an all men’s college in Indiana, I took a course in short stories and began to write them. Two got published in the college literary magazine, but I also did cartoons and was the art editor of the humor magazine. Other than cartoons I wrote satiric pieces, but that’s what launched my career in writing.

What was your inspiration for your latest book, The Lazarus Conspiracies? I guess you might say it’s the city because it all takes place in Chicago. Most of my short stories took place here. The first novel I wrote was The Satyr Candidate, a mystery, also in Chicago. You write what you know about, and I know a lot about Chicago and the police department. I worked with a detective in Special Victims, as a matter of fact, on The Lazarus Conspiracies. I wrote the screenplay first some years back, and it was a Top 10 finalist in the Illinois/Chicago Film Writing Competition. It was optioned a couple of times by independent producers, but I figured I might as well take the next step and write a novel, which I did.

What’s your biggest goal for your upcoming projects? Do you have another book, something you are working on? I have another novel I just completed called The Gumshoe. It’s a mystery set in Chicago.

Gumshoe? The Gumshoe. Gumshoe is a term that’s referred to cops – private investigators – because they wear shoes with gumshoe bottoms so they’re not overheard when they’re peeking into someone’s keyhole (laughter). Most people think that they walk around getting gum on their shoes but that’s not the origin. It’s called The Gumshoe and it’s about a private investigator in Chicago. I set it back in 1947 just to make it a little more interesting. That’s finished, and the sequel to Lazarus is in my head. That will be my next project. Pardon me. The next project is revising the screenplay, then I’ll tackle a sequel to Lazarus.

Do you think it will become a movie? I hope so because that’s why I wrote the book. I thought if the book becomes popular I’ll have a better opportunity to move the screenplay again.

With all of your writing and a busy schedule, how does that affect your personal life? I know your wife, Kay, has been very supportive and a wonderful mentor and partner. That’s for sure. I will be in a different world sometimes. She’ll be talking to me and have to remind me to listen to her because I’m on the computer or writing longhand on a legal pad, and my mind is with the plot rather than with the real world at those times. She’s very supportive. She could be my agent because she really helps me a lot getting the novel out there and marketing the book as well.

That’s extremely important. Kay Rose: Also, when Dick needed help with the fashion aspect of what women were wearing, he always came to me. Richard Rose: Kay is my fashion expert. I would describe to Kay the woman and the occasion, and she would give me all the information I needed to dress the woman in the proper attire.

What is your secret to your successful relationship? Well, Kay and I became best friends before we were married. And that’s very important because if you’re not best friends, it’s not going to work. And we have total trust in each other as well. Kay has her own business. I have mine. We support each other in our various endeavors and businesses. We appreciate and love each other very much. Besides that, we enjoy working out together too.

Kay Rose: We give each other space, like when Dick needs his writing time, I’m totally understanding of that. When I need to do work on my accessories and apparel online business, Dick understands, so we work well that way. When we have time together, it’s even more special.

Do you have any book signings coming up? We’ve been doing a lot of book signings in Indiana because we have a lake home there. I belong to the Elks Lodge, the American L, going and VFW posts and we’re going to be lining up some here in Chicago as well.

Back to the book. Tell us about the research and how you went about that process. I needed to get the police procedural down pat, and I saw an article in the Chicago Tribune about a detective in Special Victims, John DeBartolo. He was a top cop. In fact, in the squad room, he was the only detective to have his own office. So I called him and I asked if he could help me with the book. He said yes, and he did. In fact, he would pick me up in his unmarked car and take me to various locations – high crime locations – and on actual cases, a few of which appear in the book.

I also worked with a vagrant, who is another main character in the book. That was an experience in itself. He worked on a corner selling Streetwise in front of a Starbucks downtown, and I used to buy Streetwise from him. But then I had to have the vagrant become authentic, so I asked M – I won’t reveal his name – to review a copy I would write, then he would call me back. We met at Starbucks, I’d buy him some coffee, give him a reasonable amount of money, and he would tell me what was wrong with the copy.

There was usually a lot wrong with it. This relationship went on for quite a while until I got a call from a public defender saying that they had M down at one of the police stations, and he wanted me to post bond for him (chuckles) because he had an altercation with his girlfriend. So I agreed to do this and I asked how long this was going to take. You’ll be out of there in an hour he assured me. Well, they moved M to the Cook County lockup, which is a huge prison on the southwest side. I went there, and after going through security I got in this room where people were waiting to see or post bonds for inmates and I asked some guy, ‘How long have you been here?’ and he said, ‘Five hours.’ So I called Kay and said, ‘Well, I’ll be home at about midnight so have a sandwich and a martini ready for me. But I told M after that, ‘You’d better find a new girlfriend because I’m not doing this again.’

What an interesting life. Thanks for sharing your story. It’s been a pleasure!