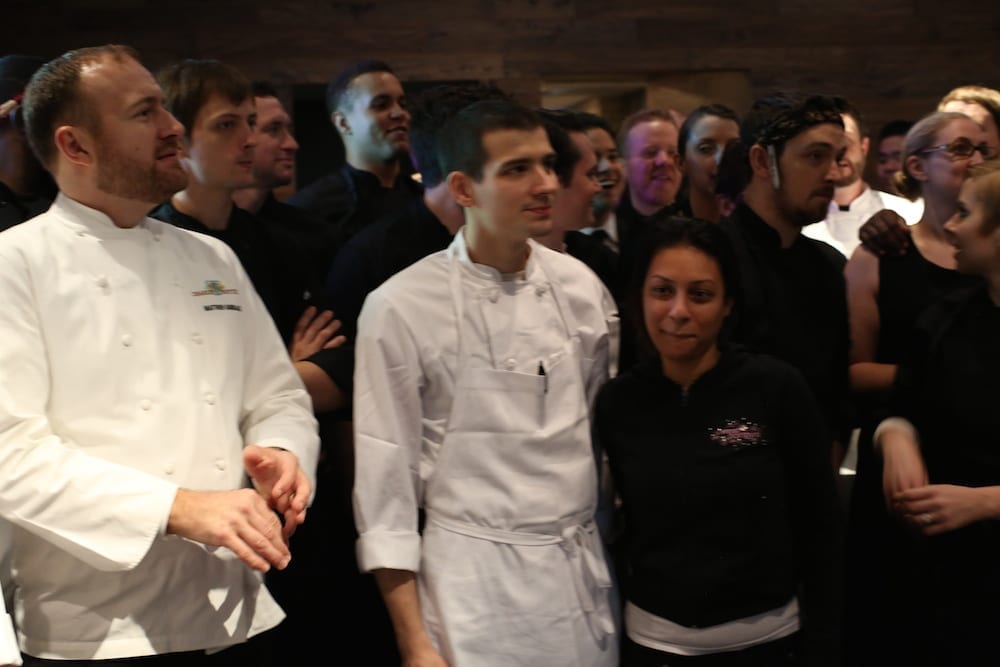 Chef Charlie Trotter and the celebration for him was as he would have done it himself and followed the unwavering principle he lived by Get the best of everything – the finest, the freshest, the purest-tasting ingredients. This was always for him the highest priority, and he believed, the foundation of truly remarkable cuisine.

When chefs, sommeliers, restaurateurs and former staff, friends, and family came together the night of Monday, November 11, to pay tribute to Chef Charlie Trotter, this principle was self-evident.

Moto owner, Chef Homaro Cantu, a Chef Charlie Trotters restaurant alum, knew he wanted to provide a gathering point for those coming in. Taking a page from Chef Trotter’s handbook – Trotter often invited former staff to help with special occasions – Cantu put out the ask to his 250 past and present employees (Moto opened in 2004) for help. Around 200 heeded the call and converged on Moto to patch, paint, fabricate and prepare for the celebration. Chefs Matthias Merges, Giuseppe Tentori and many other former chefs and staff from CT’s rallied to help. Chef Cantu’s directive was also from Trotter’s handbook; “Get the best of everything and make sure there is more than enough.” Cantu planned the menu with the assistance of Richard Farina, Claire Crenshaw, and Timothy Havidic.

Former Chef Frank Brunacci (of Trump Sixteen fame) and his wife Lillian, donated truffles from their truffle import company along with others who donated to ensure no shortage. Five varieties of caviar were shipped in. The Chef’s Garden owner, Farmer Lee Jones, purveyor of the finest vegetables in the country sent his picture-perfect vegetables; Rare Cheese Cellars supplied some of the cheeses; Oysters and fresh seafood were flown in; a ten-pound jamón ibérico leg imported from Spain arrived. Moto staff spent two days prepping. What wasn’t donated by others, Chef Cantu donated for the celebration.

Around 3:00 pm in the afternoon on November 11, guests began arriving to pay tribute and celebrate this icon, trailblazer, teacher, mentor, philanthropist, family member, and friend. For some, it had been a few months since they had seen each other, for others, longer. Guests wandered between the two levels sharing stories and reminiscing about a man who had influenced and impacted their life path. The oft-repeated catch-phrase of the evening was, “I would not be the person I am today if I had not worked for Chef Charlie Trotter.” By early evening approximately 150 chefs, sommeliers, former Trotter staff, friends and family had gathered.

Chef Cantu welcomed everyone and he too acknowledged that working for Trotter had further molded him and honed his culinary prowess. He invited Chefs Norman Van Aken and Carrie Nahabedian to speak, who, together, had helmed Sinclair’s (a Gordon Sinclair restaurant) on Chicago’s North Shore back in the ‘80s. Van Aken hired Trotter where he gained his first kitchen experience. They spoke about Trotter’s intensity, his passion for learning and his pursuit of excellence, and the livelong friendship that formed between the three. Other chefs, sommeliers, and friends also spoke. The evening continued into the late hours, all savoring the bittersweet reunion and reluctant to bid the final farewell.

Thank you to Chef Graham Elliot and his staff who hosted the group at GE Bistro on Sunday evening, November 10. Thank you also to Sari Zernich-Worsham and Derrek Hull who helped with information for this article.

“It’s all about excellence or at least working towards excellence…You have to determine whether or not you are willing to commit fully completely to the idea of the pursuit of excellence…To accomplish something truly significant, excellence has to become a life plan.” Charlie Trotter – from the introduction in Chef’s first cookbook, Charlie Trotter’s 1994

Margaret J. O’Connor is the founder/owner of MarCon Communications, a public relations and special events firm which handles the publicity and event needs for a diverse range of clients. She’s involved with numerous charities in Chicago and is active in its lifestyle and social scene. She grew up and was educated in Africa, Australia and America and holds degrees in marketing and finance from the University of Illinois. She is a contributing writer to many print and digital publications and her focus is lifestyle, culinary and nonprofit events. Read more from this author.