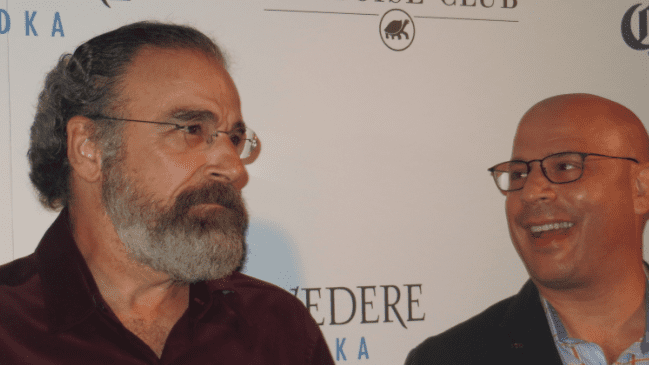 Mandy Patinkin celebrated by Michigan Ave. Magazine recently hosted a terrific party for a remarkable Chicagoan whose entertainment career has spanned over 40 years.

A packed house of adoring fans gathered at the Tortoise Club (350 N. State St.), honoring a brilliant entertainer who has never lost touch with Chicago and its people. Currently portraying Saul Berenson on the Emmy winning Showtime series “Homeland,” Mandy Patinkin’s stage career originally started on Chicago’s Southside at the Young Men’s Jewish Council Center. This is a special place for Patinkin, he said Chicago is “… where I fell in love with the theater and realized this is what I wanted to do.”

This talented south-sider, of the South Shore neighborhood, won a Tony in 1980 for his unique role in Evita. His impressive resume also includes hit movies such as The Princess Bride and Dick Tracy as well as seven solo albums. As an accomplished actor, he made a solid impression and created a large fan base for winning an Emmy award (in 1999) for Chicago Hope, not to mention starring for two seasons on Criminal Minds (C.B.S.).

Dating back to 1979, Patinkin’s career flourished with Patti LuPone, when they both starred in a tremendous production of Evita; and he has nurtured that special friendship with her ever since. “When I’m with her on stage, I’m immediately 30 years younger- I look in her eyes, and it’s a time machine. She’s one of the greatest artists who has ever lived …”

So a show business history that has lasted over 40 years has virtually come full circle for this talented south sider who loves to indulge in performing. Chicago has a lot to be proud of with Mandy Patinkin, who was among Kenwood High School’s first graduating class and is now in the Hollywood spotlight with the hottest show on T.V.

Kudos to J.P. Anderson and Dan Uslan for yet another great event.