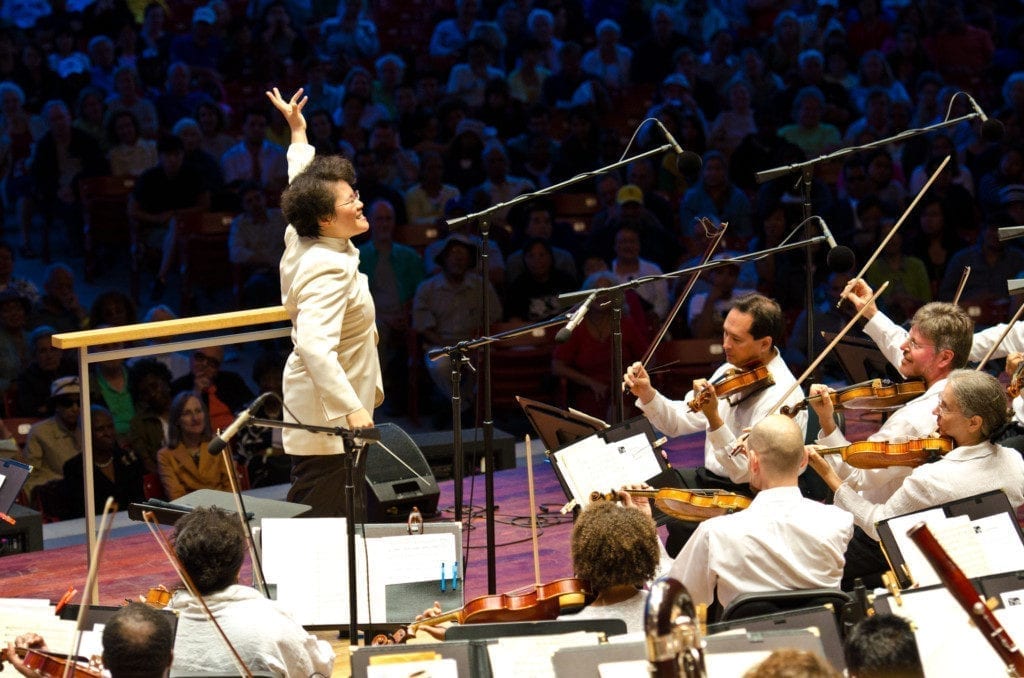 Chicago Sinfonietta, the nation’s most diverse orchestra dedicated to pushing artistic boundaries, announces an epic 30th anniversary season in 2017-2018 showcasing a full spectrum of voices and identities expressed through the universal language of music honoring Chicago Sinfonietta’s past, present and future. Under the leadership of Music Director Mei-Ann Chen, the orchestra’s season includes five subscription concerts that move beyond the pure classical cannon and encompass music styles from around the world and across the eras including Hispanic, gospel, Caribbean, jazz, tango, Middle Eastern and opera with works from Mozart, Prokofiev, Still, Bernstein, Higdon and more accompanied by film, dance, spoken word and world renowned guest artists.

Created as a response to the lack of women composers featured on classical programs across the country, Chicago Sinfonietta presents the Commissions by Women Composers Project to close that gender equality gap and promote diversity and inclusion in the field of classical music. The season long project will commission, perform, and record works by four diverse women composers as well as perform and record Florence Price’s “Dances in the Canebrakes”. The album will be recorded and distributed with Cedille records and will be available in the Fall of 2018.

“As we embrace an important milestone in the history of the Chicago Sinfonietta – 30 years! – this coming 2017-18 season, I am honored and privileged to be a part of this magnificent organization and to continue this much-treasured partnership with this incredible ensemble,” stated Music Director Mei-Ann Chen. “This season we celebrate the versatility, talent, and bold history of Chicago Sinfonietta, and the vision of its late founder, Paul Freeman, as we look forward to the future. Dynamism, diversity, creativity and collaboration of the highest caliber – they are all on display this season.”

The Sinfonietta performs its five subscription concerts in the western suburbs as well as in Chicago. The Sinfonietta’s suburban home is the Wentz Concert Hall of North Central College, 171 E. Chicago Avenue in Naperville while downtown Chicago concerts take place in Orchestra Hall of Symphony Center, 220 S. Michigan Avenue. This year’s annual Dr. Martin Luther King, Jr. Tribute Concert will be presented in Pfeiffer Hall of North Central College instead of Wentz Concert Hall. Chicago Sinfonietta’s 30th Anniversary Concert will take place at the Jay Pritzker Pavilion at Millennium Park, 201 E Randolph St, Chicago, IL. Before each show and at intermission, Chicago Sinfonietta audience members will have the opportunity to participate in interactive activities in conjunction with each concert’s theme.

Chicago Sinfonietta kicks off its anniversary season with a birthday celebration at Millennium Park honoring artists and works from the orchestra’s 30-year history. Led by Mei-Ann Chen, this eclectic program begins with FelixMendelssohn’s Symphony No. 4, Italian, the first work the Sinfonietta ever performed as an orchestra in 1987 followed by Christopher Brubeck’s Interplay for Three Violins performed by famed Celtic violinist Liz Carroll, Chicago Sinfonietta violinist James Sanders and award winning young violinist Adé Williams. The first half continues with Pablo de Sarasate’s Zigeunerweisen also featuring Adé Williams and concludes with William Grant Still’s Humor. The orchestra switches gears for the second half as punk marching band Mucca Pazza joins for Andy Deitrich’s War of Amusements followed by an epic battle of the bands between the orchestra and Mucca Pazza to the tune of Prokofiev’s Romeo and Juliet Suite. The celebration concludes with not one but four grand finales in a compilation featuring classical music’s most epic endings: Jacques Offenbach’s Can Can, Edvard Grieg’s In the Hall of the Mountain King, Gioachino Rossini’sWilliam Tell Overture and Ottorino Respighi’s Pines of Rome.

Chicago Sinfonietta opens its anniversary season with an unexpected and adventurous concert experience, a trademark of the orchestra’s programming for three decades, featuring two World Premieres as part of Sinfonietta’sCommissions by Women Composers Project. The concert begins with the World Premiere of emerging composer and violinist Jessie Montgomery’s Coincedent Dances and continues with one of Mozart’s best known piano worksRondo all Turca featuring the 10-piece Northern Illinois University Steelband who then joins Sinfonietta’s principal harpist Faye Seeman on her original solo composition Fayed to Blue before switching to the Caribbean sound of LordKitchener’s upbeat Pan in A-minor. The second half opens with the World Premiere of Grammy Award-nominated composer Clarice Assad’s Sin Fronteras featuring Chicago’s Cerqua Rivera Dance Theatre and concludes with Respighi’s monumental symphonic poem Pines of Rome. 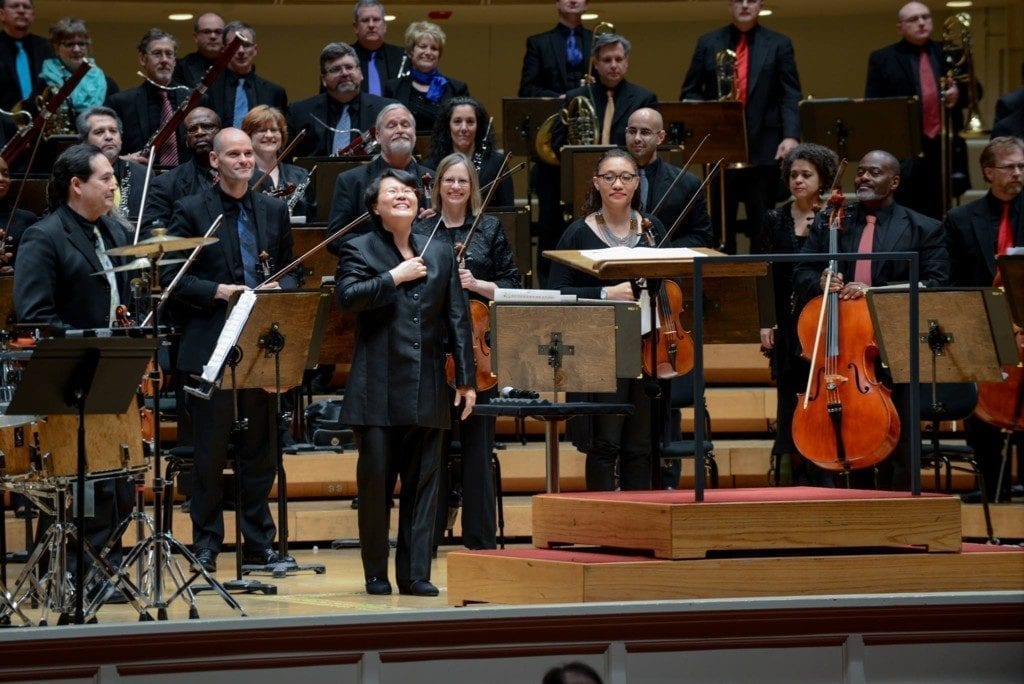 Chicago Sinfonietta celebrates the past with its annual Día de los Muertos concert inspired by the Mexican holiday “Day of the Dead” featuring recreations of the audience’s favorite moments from past seasons. Led by guest conductor Hector Guzman, Music Director of Plano Symphony Orchestra, the concert begins with Mexican composer Silvestre Revueltas’ most famous masterpiece Sensemayá based on Nicolás Guillén’s poem of the same name followed by Argentine composer and creator of the tango nuevo movement Astor Piazzolla’s Libertango. The first half concludes with an entrancing theatrical performance of excerpts from Mozart’s Requiem featuring NewMoon Chicago who will bring the music to life through spectacular visual accompaniments along with Roosevelt University Conservatory Choirs and Alumni Chorus. The second half opens with Samuel Zyman’s thrilling Fantasia Mexicana packed with Mexican folklorist expressions followed by three works by Gori Cortés: Marila, Un Cielo Para Ti and Jalisco de Mis Amores featuring the 12-piece Mexican folkloric group Cuerdas Clasicas. The concert concludes with Carlos Chávez’s most popular composition, Sinfonia India based on three melodies originating from native-American tribes of northern Mexico.

For its penultimate concert of the season, Chicago Sinfonietta places the work of leading female composers center stage with an evening-length program featuring artists from all over the word with compositions spanning nearly a century. The concert opens with the indigenous African rhythms of Price Dances in the Canebrakes by Florence Beatrice Price, the first African-American woman to have a composition played by a major orchestra, followed by the Chicago Premiere of Grammy Award and Pulitzer Prize-winning composer Jennifer Higdon’s Dance Card. The first half concludes with the Chicago Premiere of Armenian-American composer Mary Kouyoumdjian’s Become Who I Am, an exploration of gender roles and inequality featuring internationally recognized youth choir Anima Singers. The second half opens with the World Premiere of Indian-American composer Reena Esmail’s Avaaz followed by the Chicago Premiere of Dora Pejačević’s Symphony in Fm. The program ends with Grammy Award-winning composer Anna Clyne’s Masquerade, inspired by original mid-18th century promenade concerts.

Chicago Sinfonietta closes its season by exploring how music expresses love, conflict, survival and spirituality – the unseen forces that inspire us to invent, overcome and transcend. The concert begins with the Chicago Premiere of James Lee’s Come Unto Me followed by passion and conflict in an original arrangement of West Side Story for quartet and orchestra by Randall Fleischer featuring the Grammy Award-winning Harlem Quartet, which the Sinfonietta originally premiered and recorded with Harlem Quartet in 2012. The second half begins with William Grant Still’s Sunday Symphony which will take audiences on a journey of awaking, regeneration and romance before closing the program with a complication of spiritual and gospel works featuring the Apostolic Church of God Sanctuary Choir, who have performed with the Sinfonietta for nearly 25 years.

Season subscription discount packages are now available and entitle the buyer to a full range of exclusive membership benefits, including: ticket exchange or replacement privileges; discounts on additional single ticket purchases; a “Bring a Friend for Free” pass to the concert of one’s choice; priority seating; and access to exclusive subscriber offers from local partners. 2017-2018 Season subscriptions are on sale now with flexible options to fit everyone including Pick-3 and Pick-4 packages, multiple price points and even $50 full season subscriptions for students.

Single tickets go on sale July 1, 2017 with prices ranging from $20-$99 for concerts at Symphony Center and $49-$62 for concerts at North Central College with special $10 pricing available for students at both concerts. Tickets can be purchased by calling Chicago Sinfonietta at 312-284-1554 or online at www.chicagosinfonietta.org.

The 30th Anniversary Concert: A Birthday Battle of the Bands! concert at Jay Pritzker Pavilion at Millennium Park is completely free and open to the public.

Now in its 30th season, Chicago Sinfonietta has pushed artistic boundaries to provide an alternative way of hearing, seeing and thinking about a symphony orchestra and is dedicated to promoting diversity, inclusion, racial and cultural equity in the arts. Each concert experience blends inventive new works with classical masterworks, each from a diverse array of voices, to entertain, transform and inspire. In 2016, Chicago Sinfonietta was the proud recipient of the 2016 Spirit of Innovation Award presented by the Chicago Innovation Awards as well as the John D. and Catherine T. MacArthur Foundation’s prestigious MacArthur Award for Creative and Effective Institutions (MACEI). The MacArthur award recognizes exceptional organizations that are key contributors in their fields. Learn more at www.chicagosinfonietta.org