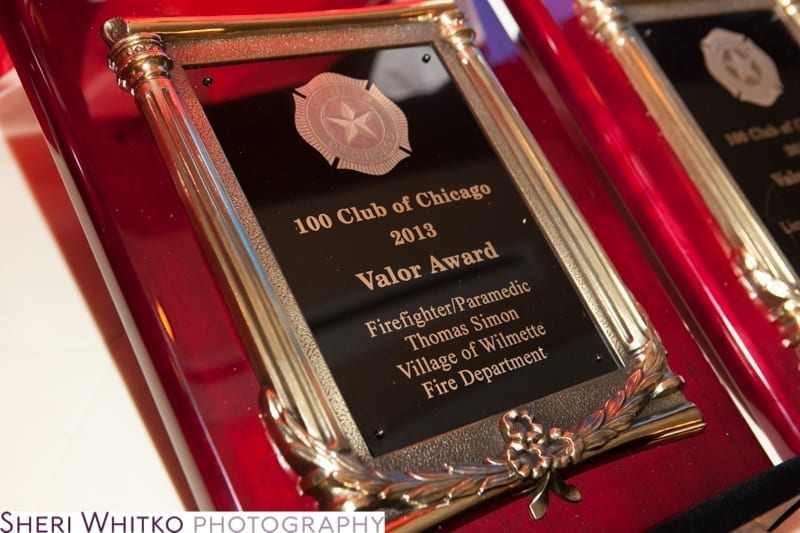 The 100 Club of Chicago, upholding a very proud tradition since1966,, recently honored significant individuals who made the ultimate sacrifice while serving in the line of duty.

Recipients of this highly respectable award are selected by their peers and were acknowledged at Maggiano’s banquet room (111 W. Grand Ave.) in front of a crowd including family members, co-workers, and 100 Club members. This historical award is “Presented to those police officers and firefighters who by their bravery acted in the highest traditions of their departments.”

Initiated in 1980, the 100 Club’s Board of Directors created the Valor Award and started an annual practice by presenting it to policemen and firemen whose remarkable actions in the line of duty proved to be for the benefit of others. Providing for surviving family members and dependents of policemen, firefighters, and other emergency personnel who lost their lives in the line of duty (to save others) is the belief statement of the 100 Club.

Among the recipients for this year’s Valor Award were: Lieutenant Anthony Bucci (Village of Wilmette Fire Dept.), Officer Frank Lacny (Village of Chicago Ridge Police Dept.), and Officer Nyls C. Meredith (City of Chicago Police Dept). Five of the seven recipients were firemen, with three of those from Wilmette.

Seen in the crowd on this memorable night were Alderman Edward M. Burke, accomplished businessman James V. Riley, and numerous members of 100 Club’s Board of Directors. A special thanks go out to C.E.O. Joseph J. Ahern, whose extraordinary efforts have not only kept this outstanding organization together but has inspired it, ultimately exceeding everyone’s expectations.

Indeed, the surviving relatives of fallen policemen and firemen have a lot to be proud of by accepting this distinguished award, while fire dept. and police personnel continue to serve the public to the best of their abilities.