Fifteen short years ago Robert De Niro, Craig Hatkoff, and Jane Rosenthal founded the Tribeca Film Festival as a response to the September 11th attacks on the World Trade Center, to restore the unique vitality which they noticed was missing in the lower Manhattan neighborhood of Tribeca.  Radio City Music Hall was the magnificent location to honor music legend Clive Davis with appearances by high profile artists such as Jennifer Hudson, Aretha Franklin, Earth, Wind, and Fire, Barry Manilow, and Carly Simon performing in front of a captive audience.

This red carpet event highlighted the Tribeca Film Festival which kicked off the 16th Annual festival with Chris Perkel’s opening night film Clive Davis: “The Soundtrack of Our Lives.”  This eye-opening documentary made its world premiere and features the outstanding achievements of Clive Davis; reviewing 50 years of his success with high caliber names including Bruce Springsteen, Aerosmith, and Barry Manilow.  The Soundtrack of Our Lives clearly illustrates how Clive Davis personally interacted and developed new and upcoming talent, shaping the course of their careers by following his musical instincts.

Starting out as a lawyer in New York, Clive Davis became the assistant counsel of Columbia Records at the young age of 28 and excelled to gain the position of Vice President-General Manager.  In 1966, Clive was named the top executive when Columbia merged with C.B.S. with British folk-rock singer Donovan being one of his earliest signings.

Without a doubt, Chris Perkel’s Soundtrack of Our Lives provides an amazing account of a remarkable personality whose career spans over five decades: becoming the President of Columbia Records, the founder and President of Arista Records, winner of five Grammy Awards, as well as a non-performing member of the Rock and Roll Hall of Fame. 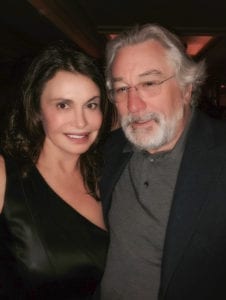 Robert De Niro was on hand and I had a significant conversation with him about Chicago, the movie he made here (Mad Dog and Glory) and the part I had in that film.  He struck me as an intriguing, multi-faceted individual who is still very charismatic and sexy.  Clive Davis on the other hand, never changes his expression whether he is working, dancing, watching a movie, or listening to a new artist; all part of his mystique.

Indeed, the continuing tradition dedicated to developing refreshing, new Hollywood film talent which started years ago has only grown bigger and better with the passage of time.  Congratulations to Robert De Niro and all the others who made this 16th annual Tribeca Film Festival a spectacular success, attracting three million visitors and generating $600 million annually.