It’s the 30th anniversary of the Alzheimer’s Association Chicago Rita Hayworth Gala taking place at the Hilton Chicago on Saturday, May 13. The organization’s efforts include working at a global level to provide support for those affected by Alzheimer’s and other dementias. The evening gala is hosted by Jon Harris, Senior VP and Chief Communications Officer at ConAgra Foods. Harris oversees the company’s foundation as well as other corporate sponsorship. 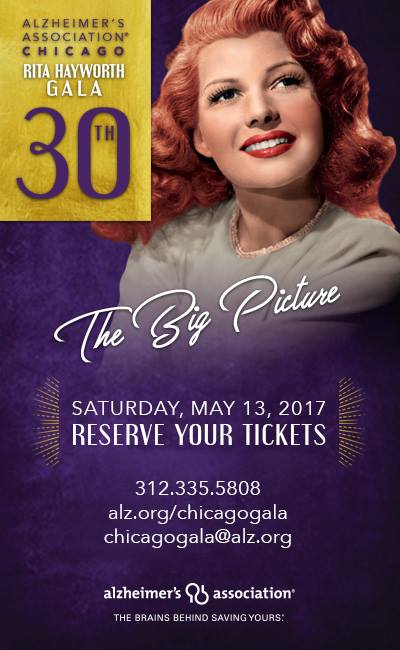 Events like the Rita Hayworth Gala are not just important, they’re also necessary because funds raised are necessary to continue research and education related to Alzheimer’s. A recent report published on their website also announces research funding signed into law which increases their funding to almost $1.4 billion.

Harry Johns, Alzheimer’s Association and AIM President and CEO, said: “This is the latest in a series of policy victories in the fight to end Alzheimer’s, but more work remains. As the leading voice for those affected by the disease, the Alzheimer’s Association, AIM and our advocates will continue to work with Congress to ensure continued bipartisan support for urgently needed research funding increases and access to necessary care and support services.”

The beautiful landmark location for this year’s Rita Hayworth Gala, the Hilton Chicago, sits elegantly overlooking Grant Park and Chicago’s Museum Campus. Were you aware that the hotel has housed every president of our country since it opened in 1927? It’s also a member of Historic Hotels of America organization.

Last year’s event drew more than 800 guests who raised more than $1 million dollars. The event was created by Princess Yasmin Aga Khan in honor of her mother, Rita Hayworth who passed away from the disease. Since its inception, monies raised a total over $70 million which go toward the organization’s vision of doing away with the disease.

The 2017 Gala will honor Cathy Edge and the Murphy Family.

Details about the event, as well as related information, can be found on their website: Alzheimer’s Association.