After Party Glamour and the Golden Globes 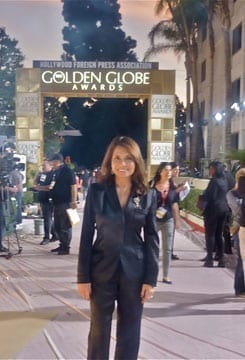 After Party Glamour in LA, another year another party, or should I say parties. This year’s Golden Globes after-parties were pretty interesting with all the scuttle going on about Ricky Gervais’s gritty hosting. Amazingly I sat and watched one star after another come up and talk with him and express how great they thought the show went.

I was somewhat astonished since there was so much shoddy press on his deliverance, but not according to the celeb’s. As the night went on I did approach Gervais and was able to have a few words with him, and actually found him very pleasant in spite of himself.

Emma Gordon, Amy Adams, and Nicole Kidman all were super nice and open. Christopher Bale was interesting, but not friendly, somewhat of a loner type.

Halle Berry was very friendly and endearing. I found her to be more beautiful in person than on screen. A terrific body. The highlight of my evening was schmoozing with Al Pacino. He was more handsome in person as well and very sexy. He calls everybody baby and loves the attention.

And of course, Michael Douglas, what a trouper. He looked frail but still had spunk and spirit. Lovely wife Catherine Zeta-Jones was very attentive, but not talkative. They departed early and seemed very peaceful and happy together. Jolie and Brad seem to be overdoing it with the kissing and hugging, didn’t look natural at all.

There certainly can be more written about this glamourous evening, however, I wanted to give everyone an insiders view (at the parties)! Hope you enjoy the photos from some of them. Just loved the After Party Glamour.

0 comments to " After Party Glamour and the Golden Globes "