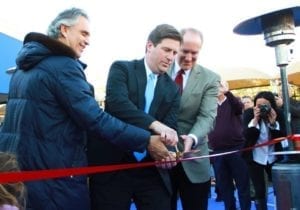 Walker has a genuine appreciation and admiration for the organization and said, “St. Vincent de Paul is an organization that has been near and dear to my heart for almost two decades. Today, thanks to Andrea and Veronica Bocelli, our celebrity friends and all the donors who attended and supported our Celebrity Fight Night in Italy this past year, we are able to give our homeless guests a brand new sports court. We are hoping the Celebrity Fight Night Court serves as an inspiration to our friends who are battling the streets and need a place to relax.”

Walker’s Celebrity Fight Night was founded in 1994 with the focus of raising money for local charities through a celebrity charity event. Since its inception, they have raised more than $100 million to benefit the Muhammad Ali Parkinson Center at the Barrow Neurological Institute, as well as many other charity organizations. CFN has also helped create the “Never Give Up” program which offers the homeless encouragement and inspiration. 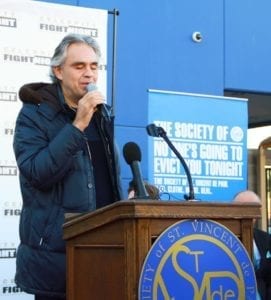 After the grand unveiling, Walker and the Bocelli’s joined Lonnie Ali for a tour of the Muhammad Ali Parkinson Center at Barrow Neurological Institute.

The Muhammad Ali Parkinson Center at the Barrow Neurological Institute in Phoenix, Arizona is the most comprehensive Parkinson’s Disease treatment facility in the United States.  Thanks to the support of Celebrity Fight Night, the Center is able to provide treatment and medicine for Parkinson’s patients who could otherwise not afford it.

Celebrity Fight Night Foundation is a nonprofit organization that was founded in 1994 by Jimmy Walker to support the Muhammad Ali Parkinson Center at Barrow Neurological Institute in Phoenix, as well as numerous other charities. For more information, visit www.celebrityfightnight.org.  2015 sponsors include The Bob and Renee Parsons Foundation, the Argyros Family Foundation, USA Today Sports, Patrón, GoDaddy, Etihad Airways, and M Group Scenic Studios.

About The Andrea Bocelli Foundation

The Andrea Bocelli Foundation was created in 2011 to help people in need due to illness, poverty, and social exclusion by promoting and supporting Italian national and international projects that support overcoming these barriers and full self-expression. Funds raised through Celebrity Fight Night will benefit one of the Breaks the Barriers Projects, this specific project is aiming to empower individuals and the community in Haiti. ABF supports 3 street schools and the Foundation is working to transform them into safe and functional structures that will become the pulsing heart of a more active community. Thanks to the CFN funds raised, ABF will be able to move forward in its work in the most remote areas of the island, bringing water, light, and agricultural aid, in addition to rehabilitation for the makeshift homes for the poorest of the poor.

Barrow Neurological Institute at Dignity Health-St. Joseph’s Hospital and Medical Center in Phoenix, Arizona, is internationally recognized as a leader in neurological research and patient care. Established in 1962, Barrow treats patients with a wide range of neurological conditions, including brain and spinal tumors, cerebrovascular conditions, and neuromuscular disorders. Consistently rated among the top hospitals in the United States for neurology and neurosurgery by U.S. News and World Report, Barrow is also home to the Muhammad Ali Parkinson Center.

Andrea Bocelli persuaded the municipality of his hometown, Lajatico, to build an outdoor theater, christened the “Testro del Silenzio” the Theater of Silence. The theater has remained silent for all but one day in July of each year when Bocelli performs there himself, which he has done every year since the theater was built. This year I had the opportunity to witness the legendary vocalist perform in his hometown.