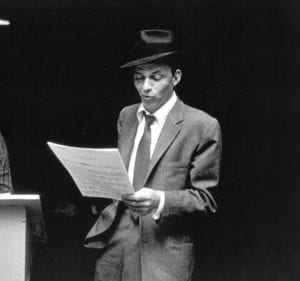 This year marks the 100th birthday celebration of Francis Albert Sinatra, one of the greatest American singers in music history. Sinatra created art out of his music; he made pop music glamorous and played a pivotal role in empowering the masses with his engaging performances on stage and screen. As his birthday approaches and his admirers reflect on one hundred years of beautiful memories, it’s worth taking a look back at some of Sinatra’s most treasured musical gems.

In late 1932, after struggling to keep a job, Sinatra decided to do what he loved most, sing. He bought and traveled with a portable PA, giving him an advantage over other vocalists. He sang at roadhouses, political rallies, and everywhere in between. In 1935, his decision to sing was reaffirmed after watching Bing Crosby perform in downtown Jersey City. His family recalls Sinatra saying,

“I was a big fan of Bing’s. He was the first real troubadour that any of us had heard. After seeing him that night, I knew I had to be a singer.”

Sinatra got his first big break while auditioning for Major Bowes and His Original Amateur Hour, a national radio program that ran on NBC from New York. He was chosen, along with a local trio, to form what became the Hoboken Four, a band that quickly began appearing in Major Bowes movies as well as in his touring performance companies.

Shortly thereafter, Sinatra decided to go solo again and through his cousin Ray Sinatra, a member of the NBC house orchestra, he was hired as part of a daily radio show broadcast. By 1939 Sinatra recorded his first song with Harry James, “From the Bottom of My Heart” (Brunswick). He went on to perform and record with the Harry James Band along with other artists like The Tommy Dorsey Orchestra, with whom he recorded more than 40 singles on RCA.

In 1940, Sinatra joined Dorsey and created a weekly radio show called Fame and Fortune on NBC. Shortly after that, he was cast in his first full-length film, Las Vegas Nights (Paramount). In the meantime, the song, “I’ll Never Smile Again” (Dorsey, Sinatra, Pied Pipers), reached the number one position on music charts.

By 1943, Sinatra entered another phase of his successful career by signing with Columbia Records. His first album on the label, “The Voice of Frank Sinatra,” was released in 1946 and was arranged and conducted by Alex Stordahl and his orchestra. It was deemed by certain critics as the first concept album and was given the distinction of being the first pop album on 33⅓ rpm when Columbia premiered long-playing vinyl records in ten-inch and twelve-inch format for classical music and ten-inch only for pop.

Sinatra’s debut with Columbia was soon followed by more new recordings including “Songs by Sinatra, Vol. 1” (1947); “Christmas Songs by Sinatra” (1948); “Frankly Sentimental” (1949); “Sing and Dance with Frank Sinatra” (1950); and so on for nine years until he moved on to a new phase of his career in Las Vegas, where he became part of the infamous (and utterly cool) Rat Pack. He was nominated for an Academy Award for Best Supporting Actor for his role in From Here to Eternity in 1953.

After a stint with Capitol Records, Sinatra started his own music label, Reprise Records, in 1961. He released many hits, including “Ring-A-Ding-Ding!”, and also recorded many of his contemporaries including Rosemary Clooney, Bing Crosby, Esquivel, Jo Stafford, and others. Reprise continues to be a success with his greatest hits collections. 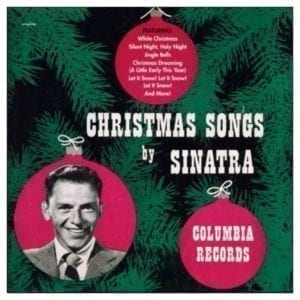 Sinatra continued a successful career in film, and musicals, and in 1950 transitioned to television for “The Frank Sinatra Show” on ABC. He was always passionate about friendships, family and music. He was a perfectionist in all he did and carried himself with the utmost confidence, impeccable style, and grace.

When he left us, he left an incredible void that was hard to fill, yet we move forward in awe of the legacy of a man who transformed simple words into magical soundscapes. Through his music, we’re transported to lands of enchantment, far away from the chaos of everyday life. Sinatra’s music lives on in every one of us. Let’s continue this beautiful American tradition, and share the peaceful warmth of his voice in song.

On a personal note:  I had the privilege of knowing Frank Sinatra personally with his wife Barbara. I will treasure the long talks we all had in their suite after a performance. Special thanks to Nick Caruso Sr. for all the fun and good times the gang had together…