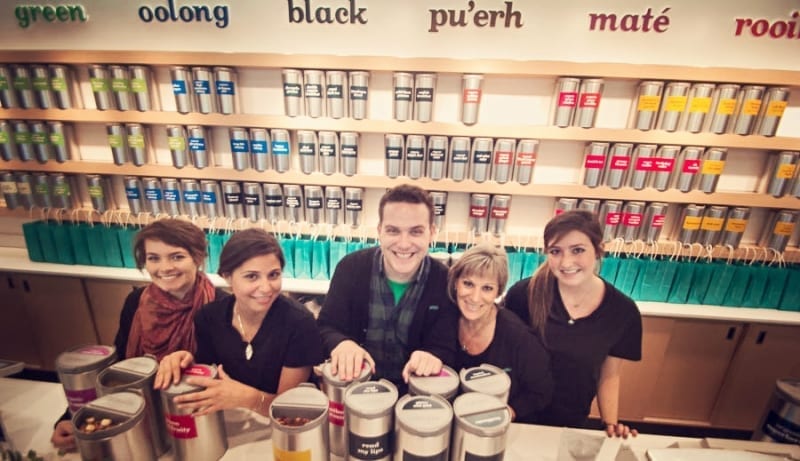 David’s Teas Chicago at 1645 N. Damen swung open its doors and offered its terrific tea samples to virtually anyone passing by, from housewives to joggers to taxi drivers.

Complete with everything from trays of mouth-watering hors d’oeuvres to a professional mixologist creating custom made tea-infused drinks (while practically dancing in the front window), this new location captured a lot of attention from everyone in the neighborhood.

Among three new hot spots in Chicago, this particular David’s Tea shop offers everything a tea drinker could ask for: 150 varieties of loose leaf tea, an endless supply of innovative accessories, and a cafe featuring made to order hot or cold tea; all in a very refreshing, bright, and therapeutic atmosphere that looks like it was designed by a Feng Shui expert.

With more than 80 stores open nationwide, this Montreal – based success story seems to have a winning formula: According to Food & Wine magazine (March 2012) “David’s Teas green tea named 1 of 50 ways to get stronger, smarter, and healthier.” While the NBC Today show declared that David’s Teas are “Teas that take a twist on traditional.” Even the prestigious New York Times gave a glowing recommendation, asserting that David’s Teas are “Serious about their loose teas.”

So whether you’re searching for black tea to conquer stress, rooibos tea added to your bath water as a natural skin refresher, or exotic oolong tea for healthier gums and teeth, David’s has something for everyone (even in-store WI-FI service.)

Congratulations on your worldwide success and good luck here in Chicago!!

Great tea, friendly stores, and above-and-beyond customer service. It seemed like a simple idea, but we couldn’t find anyone else that was doing it. So in 2008, we decided to take matters into our own hands. We opened our first store on vibrant Queen Street in Toronto, Canada, and before long, first time customers became regulars, our neighbors became our friends and our store became a community fixture. And the same thing has happened at every new store since. Today DAVIDsTEA has over 230 stores in neighborhoods and communities across Canada and the United States. And we’re not slowing down any time soon – we can’t wait to share the DAVID’s TEAS experience with the whole world.