A Farewell to Hot Doug’s 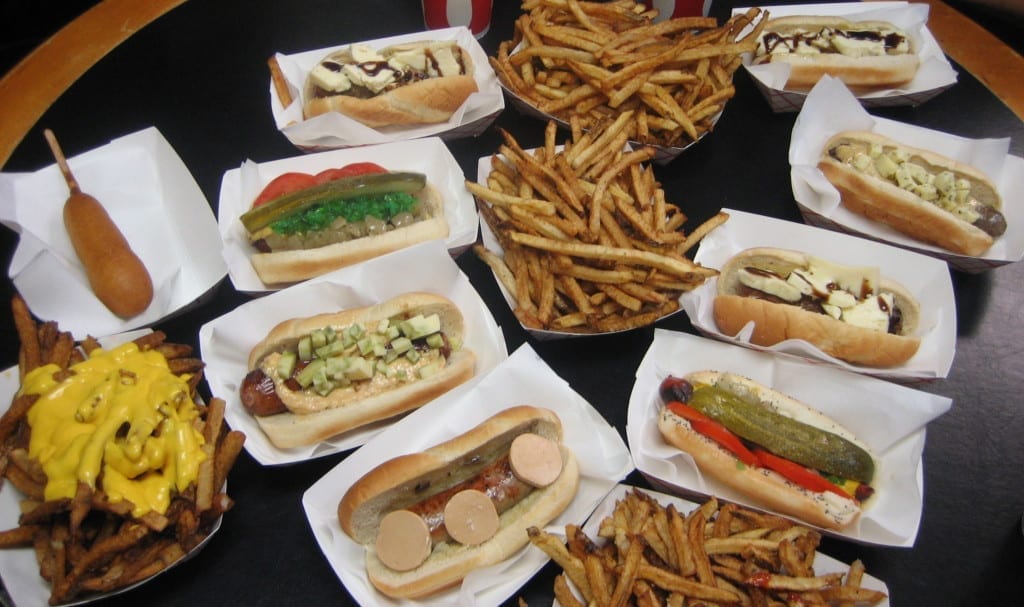 This past Saturday marked the last Saturday that Hot Doug’s will be open. Located at the corner of Roscoe Street and California Avenue in Avondale, hundreds of people lined up about five blocks down Roscoe to get the last taste of Doug’s amazing gourmet hot dogs. The first people in line staked out their spot at 2:30 AM, and the line kept growing until about 8:00 am when they had to cut it off.

“There are no two finer words in the English language than ‘encased meats, my friend.” These are the words that are displayed on the wall and on the back of employees’ shirts at Hot Doug’s. After my experience there on Saturday, I couldn’t agree more.

Yes, I know this sounds ridiculous, and yes, my friends, if you must ask, I was one of those “crazy” people that waited in that line. I ended up meeting up with some friends who grabbed a spot in line at 7:30 AM. By the time the doors opened at 10:30 to the time we got our meal, the wait took about 8 hours. We kept busy by playing card games such as BS and ucher while hanging out in lawn chairs and drinking a few beers. The people behind us brought a game of Taboo. We passed the time getting to know people around us. Most of the people were from the Chicago area, but the people in front of us were all the way from Toronto; they explained what was on the Foie Gras hot dog Special that I had been itching to try since I saw it on Anthony Bourdain’s Chicago episode of No Reservations.

All of my friends and family asked if I was nuts for waiting in an 8-hour line for food. “No hot dog is worth that long of a wait!” However, I have to admit that it was the only line worth waiting in.

Hot Doug’s has become a landmark around Chicago, especially for those who take pride in the traditional Chicago-style hot dog. The owner, Doug Sohn, opened Hot Doug’s back in 2001 and announced this past May that he would be “going on a permanent vacation” starting this Friday, October 3. When asked why he responded that it was time to do other things. Sohn has made appearances on national and local media for his truly unique menu and the fact that Hot Doug’s makes the best hot dog on this planet. 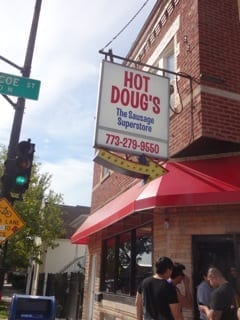 The menu at Hot Doug’s is something to marvel at because you won’t find any sort of plain hot dog on it. There is the traditional Chicago-style hot dog, which as any self-respecting Chicagoan knows is topped with diced onions, tomatoes, sweet pickle relish, sport peppers, mustard, a dill pickle, and celery salt. Of course, I had to order one of those, but a trip to Hot Doug’s wouldn’t be complete without ordering one of the specials. My friend Bridget and I split the Foie Gras hot dog which is a Sauternes and Foie Gras Duck sausage topped with truffle aioli, foie gras mousse, and fleur de sel. It was rich to be sure and so delicious. I had never tasted anything like it. We ordered the bratwurst, which was cooked in beer and topped with sauerkraut along with duck fat fries, which are heavenly. We ate until we couldn’t stomach any more. Doug never met meat he didn’t want to encase. He features exotic meats such as alligator and rattlesnake on the menu causing Chicagoans to go nuts and try new sorts of gourmet meats while still keeping cash in their pockets. Needless to say, it was a meal that I will never forget, and it may possibly be the best meal I’ve ever had.

It’s not a happy subject to talk about the fact that Hot Doug’s is closing, but Chicagoans have enjoyed his hot dogs for 15 years. With its unique menu and massive following of customers, Hot Doug’s will be embedded in our memories for years on end. So long, Doug! You will be missed, and thanks for giving Chicago the best tasting hot dog in America!