Congratulations to Dennis Andritsis: from the streets of Chicago to the 16” Softball Hall of Fame!

Over an outstanding 15-year athletic career spanning 1963 – 1978, Dennis Andritsis played 16” softball for one of the greatest softball teams in the history of the game: Sobies Sports Tap from Cicero. 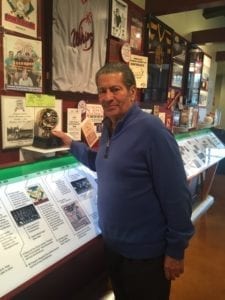 On April 16th he will be awarded the highest of all honors: being inducted into the Softball Hall of Fame by the American Softball Association (A.S.A.)  As the youngest player on the team, Dennis held the unique distinction of having played at every position, but he excelled at 3rd base.

It will be a very special day for 16” softball as Dennis is inducted in front of 700 enthusiastic fans who are eager to acknowledge Dennis’ exceptional talent and achievements.  Dennis’ stellar career includes many highlights, during a time when Sobies’ achievements were considered monumental: winning the world 16” softball championship three years in a row—1966, ’67, and ’68.

The era from 1963 to 1978 were very significant years, as Sobies Sports Tap was victorious in every major softball tournament in the Chicago area.  Highly regarded as softball superstars during this time period, the Sobies has been selected as one of the five greatest teams in softball history, as designated by the A.S.A.

Sports fans can clearly see that Dennis Andritsis and his teammates’ success on the softball diamond gives a new and exciting meaning to the phrase “Take me out to the ball game ….”  He truly is what the Greek spirit is all about.

For further information please visit the16″ Softball Hall of Fame Museum at www.16inchSoftballHOF.com