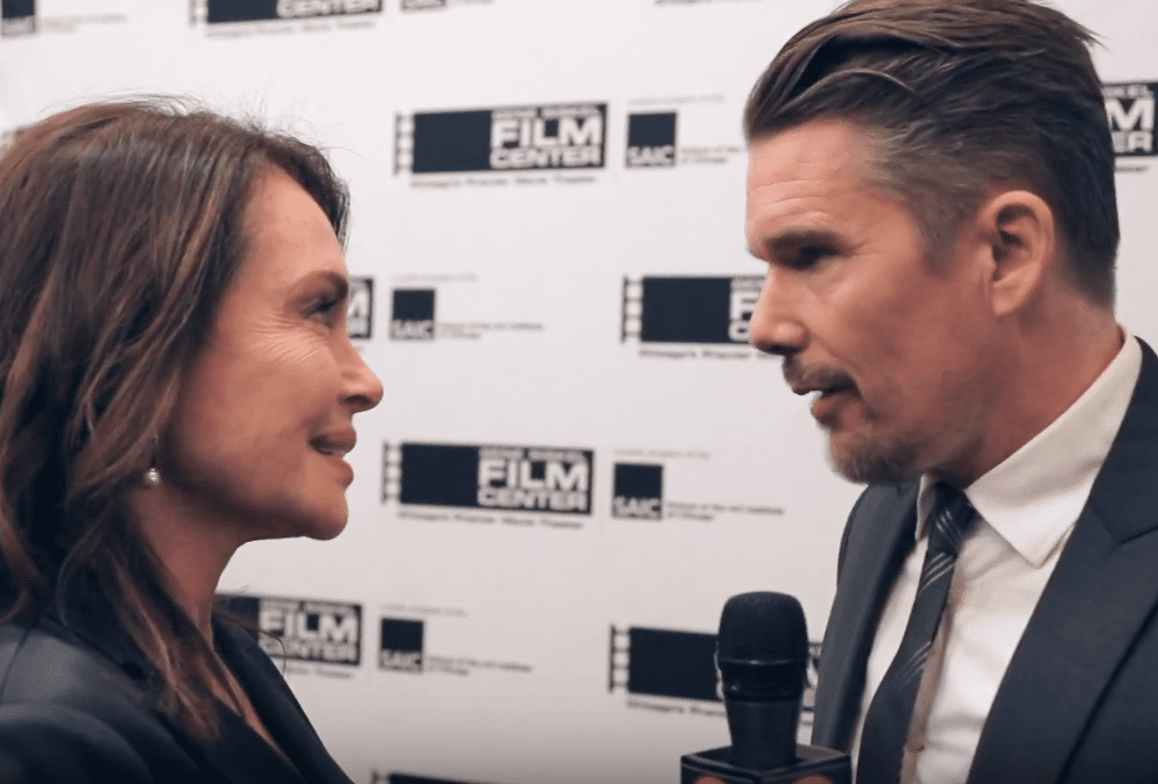 We spoke with Director, Writer, Actor Ethan Hawke who was in Chicago to receive the Gene Siskel Film Center Renaissance Award at a gala in his honor at the Ritz-Carlton Chicago. The accomplished artist has acted in over 74 films, in addition to being a published author, writer, and director.  His upcoming film “BLAZE,” which was co-written, produced and directed by Hawke and will open in theaters this fall. “BLAZE” is inspired by the life of Blaze Foley, the unsung songwriting legend of the Texas outlaw music movement that spawned the likes of Merle Haggard and Willie Nelson.

Hawke also stars in Paul Schrader’s timely political and environmental thriller “First Reformed”, in which he plays the lead opposite Amanda Seyfried. The film premiered at the Venice, Telluride and Toronto Film Festivals garnering Hawke some of the best reviews of his career as an actor. “First Reformed” opened in theaters in May.

Thank you to Ethan Hawke for the wonderful interview.

READ ANOTHER I ON THE SCENE STORY: HERE

Biography of Ethan Hawke from Wikipedia:

Ethan Green Hawke (born November 6, 1970)[1] is an American actor, writer, and director. He has been nominated for four Academy Awards and a Tony Award. Hawke has directed three feature films, three Off-Broadway plays, and a documentary. He has also written three novels. He made his film debut with the 1985 science fiction feature Explorers, before making a breakthrough appearance in the 1989 drama Dead Poets Society. He appeared in various films before taking a role in the 1994 Generation X drama Reality Bites, for which he received critical praise. Hawke starred alongside Julie Delpy in Richard Linklater‘s Before trilogy: Before Sunrise (1995), Before Sunset (2004) and Before Midnight (2013), all of which received critical acclaim.

Hawke has been nominated twice for both the Academy Award for Best Adapted Screenplay and the Academy Award for Best Supporting Actor; his writing contributions to Before Sunset and Before Midnight were recognized, as were his performances in Training Day (2001) and Boyhood (2014). Hawke was further honored with SAG Award nominations for both films, as well as BAFTA Award and Golden Globe Award nominations for the latter. His other films include the science fiction drama Gattaca (1997), the contemporary adaptation of Hamlet (2000), the action-thriller Assault on Precinct 13 (2005), the crime drama Before the Devil Knows You’re Dead (2007), and the horror film Sinister (2012). In 2018 he garnered critical acclaim for his performance as a Protestant minister in Paul Schrader‘s drama First Reformed(2017), receiving numerous accolades, including the New York Film Critics Circle Award for Best Actor, the Independent Spirit Award for Best Male Lead, and a nomination for the Critics’ Choice Movie Award for Best Actor.