I On Star Wars: The Force Awakens 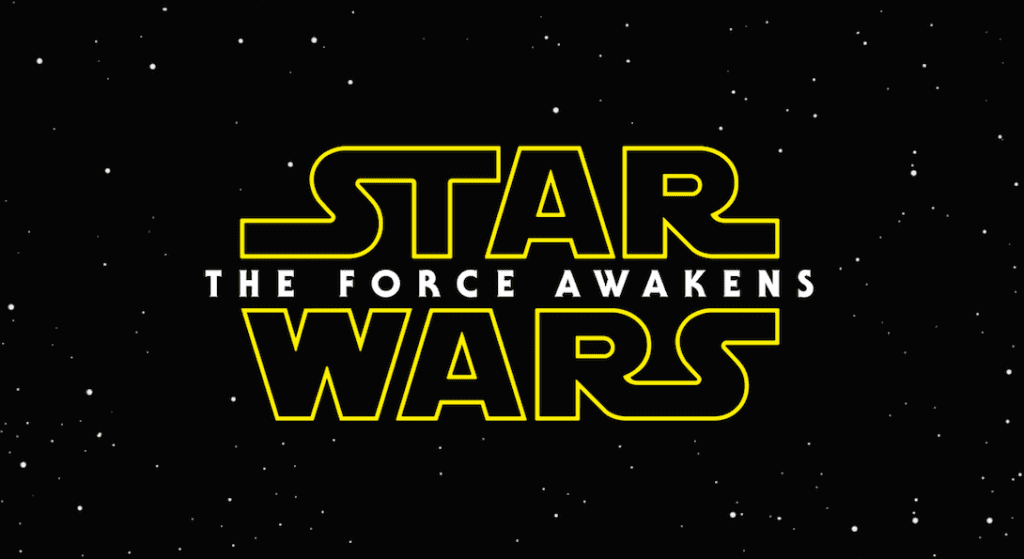 It’s a great thing this review comes after the film’s opening weekend and not before. Otherwise, I’d have no idea how to tell you what needs to be told without saying too much. As a matter of fact, numbers for the opening weekend of Star Wars Episode VII: The Force Awakens are already available. Variety reports that “Star Wars: The Force Awakens micronized box office records this weekend, racking up a monumental $238 million opening and justifying the Walt Disney Company’s $4 billion purchase of Lucasfilm.” 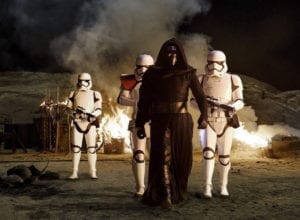 I’ll say this: Things happen that require the film’s catharsis; a resurfacing from the evil grasp of the murky depths it was in.

Am I seeing things from a different perspective? Absolutely. I tend to ponder. Spoilers ahead.

As I sat back and relaxed, my 3D glasses on, before me on the massive screen appeared blazing galactic battles thrusting me from one end of the galaxy to the other. We flew through space in zig-zag motions as if we were an apocalyptic flash of rage running straight into tests of ultimate life and death. All the while the intricate sounds of an ingenious soundtrack played along seductively, aggressively. The bass was so low, I felt the dark side. I also felt The Force and it was fierce, scary, and empowering.

The film begins with the iconic scroll of words explaining the upcoming battle between light and dark forces. Luke Skywalker has gone missing and there’s a map that leads to his location. Rey (Daisy Ridley) appears scavenging the desert for salvage abandoned ships. She seems to know her way around the massive starships. She stops when she runs out of water and hops on her speeder traveling fast over Jakku’s beautiful and vast desert, dotted with metal hunks of wrecked space vehicles.

At some point, Rey will run into Finn (John Boyega) a First Order deserter on the run. The ex-Stormtrooper, who initially hides his identity, crash-landed on Jakku after trying to save charismatic resistance pilot Poe Dameron (Oscar Isaac) from the grips of the evil First Order, led by wanna-be Darth Vader, Kylo Ren (Adam Driver – what? I know! that Adam!). Poe, who has now gone missing, was in possession of the map that leads to Luke but was able to hide it away on his droid, BB-8, which is somewhere on Jakku. 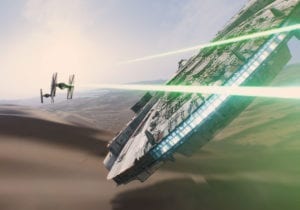 This is the current parallel of the original beloved trio. And it’s a beautiful thing.

Although some characters are new, the story isn’t and you feel comfortable with what’s happening. When familiar faces appeared, though, you could feel a collective smile light up the audience. Yes, Chewbacca is there, Han Solo, too, and of course Princess Leia, now a general. All of them eventually work together in search of their respective loss, with grand moments of sorrow and joy in between, and little time at the moment to really reflect on the feelings being evoked.

I needed a second opinion, so I decided to find out what my best friend thought. Not only does he have an eye for things I tend to miss, but he also has a passion for, and experience in the craft of, moviemaking and storytelling:

What would be your recap of the film?
I felt that it was very, very tightly packed. It’s what we wanted as fans. But, like they say, “be careful what you wish for.” It’s exemplary of what we have become as an audience of the film in the US, with mile-a-minute action and little room for digestion of story and characters. I also felt like J.J. Abrahams stuck so close to the original formula it was painful. Little risks were taken other than camera placement and movement. Although watching them in order chronologically this past week, helped digest it in regards to pacing. From slow to hyperspace.

Did you cry?
I got a little choked up for Chewy when he reacted. I think I got verklempt when I saw Luke.

Is this the best of the series?
I think it’s second. It’s tough to say simply because the CGI has advanced so much even since Ep. 1, 2, 3. My favorite is Return of the Jedi. I don’t think I have a favorite yet. This was the most in-your-face edition for me. I agree it just went through so much so fast that I think I’ll have to see it again.

Does it correlate to current situations?
There’s always a socio-political statement on America but more on the secret society.

Does it have the power to enlighten or is it just entertainment?
The enlightenment can be obtained from the overall series.

Do the new characters make you curious?
From this one, more like it sets a standard for effective diversity in film casting.

All I really have to say at this point is: GO SEE THE MOVIE.