This week is the anniversary of Judy Garland’s passing, and we look back at her incredible life as a performer. Judy was born “Frances Ethel Gumm” in Minnesota, into a family of vaudevillians, making her first live performance at the age of 2. Although her life may have always seemed glamorous, her family life was often complicated with a mother obsessed with fame and father’s hidden sexuality.

Eventually, the day came when Judy was discovered by an MGM executive, initiating her name change. The studio forced an awkward image on to her, sometimes even labeling her as an “ugly duckling.” This obvious, untrue branding started Judy in dealing with criticism of her image and her body. Soon after her talent recognition, a successful singing and acting career evolved, leading her to the magnificent role as Dorothy in “The Wizard of Oz.”

After this film, she married the director (Vincente Minnelli) and gave birth to future superstar-diva Liza Minnelli. After this joyous time, Judy began to deal with major depression, affairs, and substance abuse. She continued a successful career; making a comeback with Fred Astaire, along with starring in multiple movies and giving live performances. Judy also took to the stage with her daughter Liza, but tragically overdosed after a concert in London. Although her life was filled with many ups and downs, they were never apparent during her incredible, award-winning career. 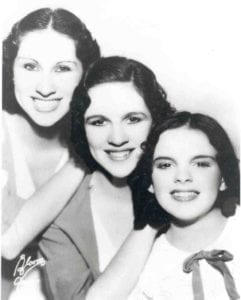 A family of performers: in the center, then Frances Ethel (Judy Garland) with Dorothy Virginia and Mary Jane Gumm. The group toured the vaudeville circuit and appeared together in a few films, much of this developing the success of Judy’s career and catapulting her to a contract with MGM.

Here is Judy twirling and singing “I Don’t Care” from 1956 classic “In The Good Ol’ Summertime.”

Judy with daughter Liza- the family resemblance is uncanny, as is an incredible talent these two shares.

Judy Garland left us with an array of classic gems, consisting of her music and films. She has inspired millions and will be forever remembered as a legend.