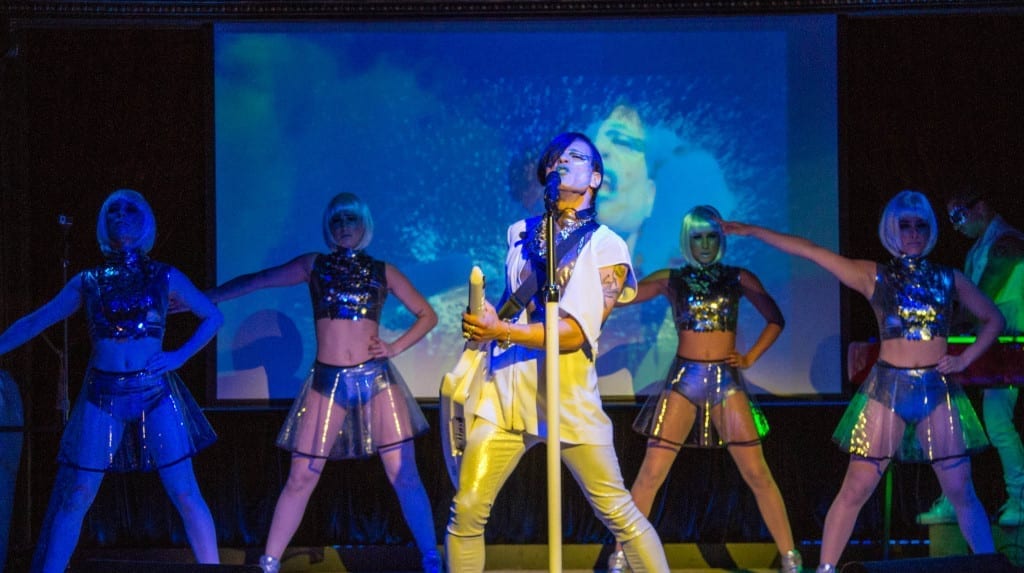 At The Cutting Room, a contemporary nightclub on 32nd and Park Avenue, the stage awaits its performer while tables fill with patrons dining and drinking on a Wednesday evening in May. The white empty stage starkly contrasts the rock and roll decadence of the venue. Hanging from the ceiling is a chandelier made of white and orange guitars. Beneath the sky of music, naked beauties—body-painted “sexy robots” hand out sunglasses with “Cary NoKey” scribbled across the lenses. The electric sounds of dance music thump over the chitter-chatter of people talking. The white screen behind the stage is flickering a black and white logo of the night’s performer, Cary NoKey; the emblem of a closed fist in a palm— an emblem that shouts out, F*@K the labels, the stereotypes, the bullying; let’s stand together! “B WHO U R!”

The music gets louder. Electricity begins to circulate throughout the space. Dancers emerge within the crowd and walk about, staring and dancing to the uprising beats as videos of Cary NoKey play on the screen. The stage is still bare except for a DJ booth in the background, an electric keyboard off to the side, and a microphone stands in the front. The screen goes blank. The music stops. The excited crowd is silenced by a robotic voice. 8 Bit enters the room and the show begins.

Emerging from behind a curtain above the crowd, 8 Bit slowly transcends down a flight of stairs from the right of the stage. His raven hair swoops down covering one eye. Donned in silver, white, and plastic, he is the perfect combination of glam and goth. He is early David Bowie, Rob Zombie, and Andy Warhol. Iconic.

He begins singing while approaching the stage, a single spotlight affixed upon his silhouette. Patrons who were moments ago sitting, eating dinner, stop; they’re transfixed. Customers at the bar put down their whiskey and beers and are magnetically drawn to 8 Bit. The crowd is hypnotized. All the attention is his. For the next hour, The Cutting Room, a rock and roll lounge in Midtown, is transformed into an audiovisual orgy that looks like Baz Luhrmann himself directed it. Gorgeous women in metallic mini-skirts, hunky men in army boots, carnival masks, robotic movements—it was truly a performance of apocalyptic proportions, a celebration of life!

Towards the end of the show, the heavy bass beats subside for a slowed-down solo medley of “Summer”, “Have It All”, and “Celebrate Me Home” showcasing 8 Bit with his keyboard. There is no denying the talent. 8 Bit is a savant on the keyboard, the guitar, and oozes emotion from his singing. Tracks like the uplifting “Incredible” and ‘Radio Star” are lyric-driven, beat monsters which are huge crowd-pleasers. People who never heard the music were standing and dancing. Encore! Encore!

After a wardrobe change, 8 Bit returns and the beat picks up. The re-assuring, self-affirming anthem “B Who U R” is the highlight of the show. For a night, The Cutting Room was Vegas glitz and Miami glamor. Studio 54 crashed into the Viper Room.