The History and Traditions of the Kentucky Derby

The Kentucky Derby is rightly known as “the most thrilling two minutes in sports.” About 170,000 spectators attend the event every year, with hundreds of thousands more watching from their TVs. The in-person crowds have included well-known celebs, from presidents to royals. The derby is designed for three-year-old Thoroughbreds which are run at Churchill Downs in Louisville, Kentucky.

The race day is always the first Saturday in May of every year, but Louisville cranks up two weeks in advance with a number of parties, celebrations, and events that climax with the yearly Run for the Roses.

Though breeding and racing Thoroughbreds had been popular in Kentucky since the 1700s, the famous derby began with Meriwether Lewis Clark, born in 1846. Clark was the grandson of William Clark, the legendary explorer, and the son of Abigail Prather Churchill. The Churchills were one of the first families in Kentucky, relocating to Louisville and acquiring 300 acres just south of the city in 1787.

When Clark’s mother passed away, he went to live with one of his Churchill aunts and her sons, Henry and John, who had inherited the Louisville acreage. The family was rich, with a taste for the finer things in life. This rubbed off on Clark, who developed a fervent interest in racehorses.

In 1872, young Clark traveled to Britain, in which he saw the great Epsom Derby. From Britain, he traveled to France to see the Grand Prix de Paris, the biggest race in that country. His experience in Europe motivated him to try out the same thing in Kentucky.

Upon coming back to America, Clark started the Louisville Jockey Club and started raising the required money to create a race track. His cousins Henry and John donated the land, and the facility became known as Churchill Downs, even though the track was not formally named until 1937.

About 12,000 people watched fifteen horses run the 1.5-mile race at the first Kentucky Derby, held on May 17, 1875. The champion of that first historic race was Aristides, who went on to place 2nd in the Belmont Stakes. In the following year, the course was increased by 1.25 miles.

In spite of its early achievements, the Kentucky Derby and Churchill Downs struggled financially for many years. Things started to turn around in 1902 when Matt Winn formed a group of business owners to buy the facility. Winn made many trips to New York City, the center of horseracing at that time, to motivate owners to race their horses at the Louisville track.

Under Winn’s watch, Churchill Downs grew to become a well-known venue for prestigious races, and the Kentucky Derby became the most important Thoroughbred race in the United States.

Much tradition and fanfare are deeply embedded in the race. 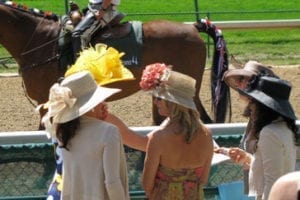 Drinks: The official drink of the race is the mint julep, a mixture of ice, bourbon, sugar, and mint leaves, served in a frosted commemorative glass.

Just like lots of well known destinations and international events like the Olympics, Tour de France, Scandinavian Summer Solstice, Quebec’s Winter Carnival, New York City’s Madison Avenue, the Louvre or Eiffel Tower in Paris, or Egypt’s Pyramids – going to Louisville’s Kentucky Derby is truly an amazing trip where you are certain to have truly impressive memories that last a lifetime. If you are intending on attending the 2016 Kentucky Derby, start making your plans right now so that you can kick back and have fun throughout your visit to Louisville!

On a personal note even though Nyquist will enter the Kentucky Derby on May 7th with an undefeated record and the best chance to earn an immortal place in history as the thirteenth Triple Crown winner, my favorite is Bob Baffert-trained, Mor Spirit.