“Toast to the Coast” at the Racquet Club in Chicago 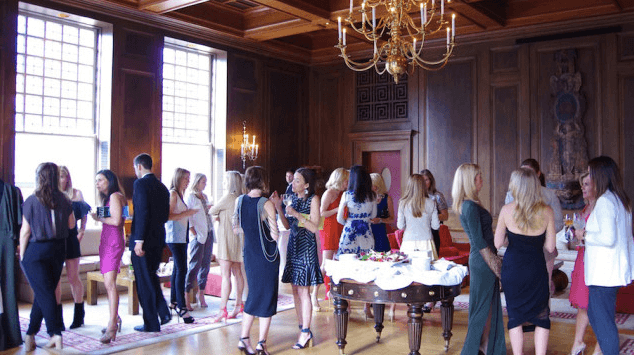 Once again upholding its outstanding image in the Gold Coast community, the Gold Coast Neighbors Association recently held its annual “Toast to the Coast” event.

Founded in 1869 by a hundred upstanding citizens of the Gold Coast area, and surviving despite the small setback of the Chicago Fire in 1871, the historically significant Racquet Club at 1365 N. Dearborn St. was the ideal setting for this wonderful fundraiser. Attracting dozens of loyal G.C.N.A. members and their guests, this annual gathering supports the Safety Patrol of the Gold Coast neighborhood. 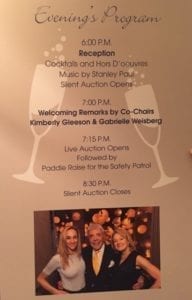 Gold Coast Neighbors Association festivities got underway at 6:00 with a refreshing cocktail party including hors-d’oeuvres and the talented Stanley Paul Orchestra providing terrific ambiance, filling the party room with delightful music. The success of the Safety Patrol during the past few summers has kept the program going, returning again in 2016.  Some of the issues the Safety Patrol is concerned with include: watching for disturbances, notifying the police, assisting the police, identifying property damage, and intervening on behalf of citizens when they are threatened.

Specifically, the Safety Patrol consists of two experienced off-duty police officers protecting the community primarily on weekends from 9:00 P.M. – 5:00 A.M. on Fridays, and continuing all day on Saturdays, leading into Sunday mornings.  During a usual calendar year, the Patrol begins on Memorial Day weekend and concludes on Labor Day weekend.

Welcoming the amiable crowd on this evening were co-chairs Kimberly Gleeson and Gabrielle Weisberg.  An eye-opening live auction featuring spectacular prizes including an impressive 48-bottle wine collection and a V.I.P. tour at Cardinale Vineyards in Oakville, CA successfully raised thousands for this noble cause.

Congratulations to Kim Gleeson and Gabrielle Weisberg, along with generous sponsors including 1540 N. Lake Shore, George Bruha, John Gable, and Anida Johnson “Cookie” Cohen for a magnificent soiree where no one walked away without truly being uplifted by such a remarkable organization.