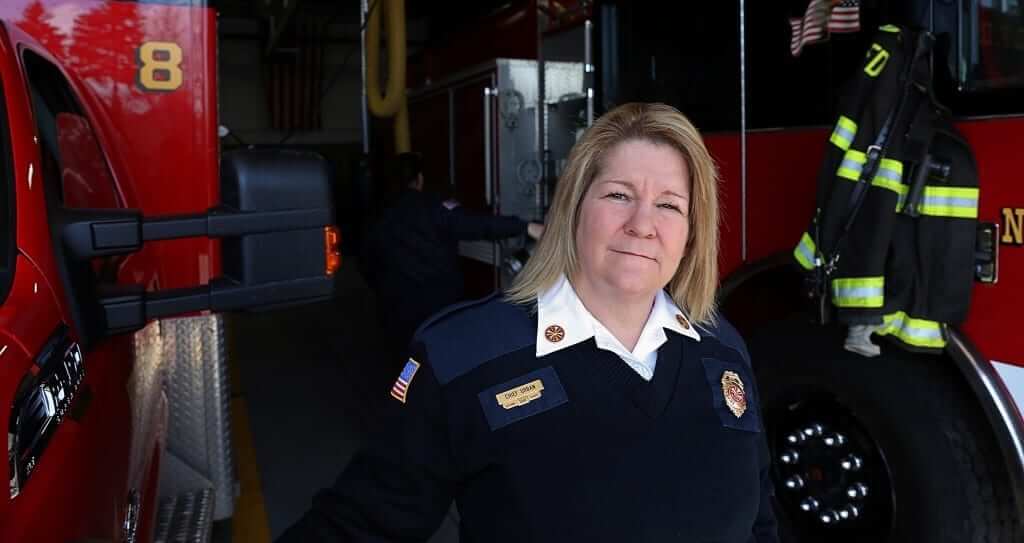 Dell Urban is chief of the North Chicago Fire Department, supervising 36 firefighters. She is one of the few female fire chiefs in the country. Dell Urban considers herself one of the guys. But she is the boss. 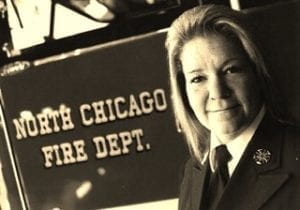 Urban was raised in Wadsworth and graduated from Warren Township Senior High School in 1987. In her youth, her interests led her to want to be a professional photographer. Her dream job was to work for National Geographic Magazine. Not until her brother Lonnie, a volunteer firefighter at Newport Township Fire Division, took her to the Wadsworth fire department in 1988 did Urban consider a career in fire-fighting. She loved what she saw, and quickly joined the department as a volunteer.

“I signed on and got my legs wet,” recalled Urban, then 18 years old, who was approved by Columbia College in Chicago to study photography. “I believe I made the correct choice to become a firefighter instead. I still maintain photography as an activity.”

While undertaking a career in fire-fighting, Urban went to the College of Lake County and obtained an Associate’s Degree in emergency management and fire research technology. She then went to Oakton Community College to further her studies. In the meantime, she kept herself fit. As a beginner firefighter, she needed to be agile, able run 1. 5 miles, ascend the ladder, and pull loads of 250 pounds.

After four years as a volunteer firefighter, Urban became a certified firefighter. She joined up with the North Chicago Fire Department as a paramedic. Rising gradually through the ranks, she was promoted to lieutenant, health care officer, and then shift commander before being selected as fire chief by Mayor Leon Rockingham, with approval from the Town Council. 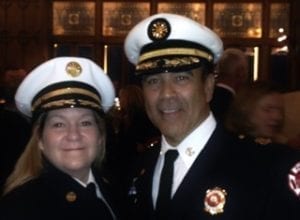 Mayor Rockingham lauded her for her leadership and claimed she was a key factor in securing grants to enable the city to seek the services of other firefighters, as well as to get new equipment such as the aerial truck and ambulance.

Urban heads a staff of 37, including 36 firefighters. Her department has three fire engines, 1 aerial truck with an 85-foot ladder as well as three ambulances. There are two women on her staff: Lt. Kim Schaefer and firefighter Michelle Miller.

“We’re extremely lucky to have able and hardworking staff,” says Urban, who was selected a year ago by the Lake County Fire Chiefs as fire chief of the year in Illinois. In 2013 she was also honored by the late Illinois treasurer Judy Baar Topinka for her 25 years of committed service as a firefighter. The North Chicago Chamber of Commerce had previously named her Firefighter for the Year in 1994.

The North Chicago Fire Department takes care of the city of eight square miles, and is also on call to give mutual help to 29 neighboring communities.

Urban describes her days as always presenting new challenges and opportunities: “I always get out of bed early in the morning never knowing what’s gonna occur. Each day is unique. Some days are peaceful while others are topsy-turvy. That’s one of the interesting things about the job.”

Urban remembers her very first day at work as lieutenant; she had to head out to stop a fire at the North Chicago High School that caused around a million dollars in damage. As chief, she has dealt with a number of critical fires. In fires and accidents, she ensures that her division responds as fast as possible and also handles any situation to the best and fullest capability.

“I need to give thanks my brother for my profession, simply because he is the one that took me all the way down to Newport Fire to volunteer,” Dell Urban said. “He reminds me of this very often.”