A Look Back at the Grammys 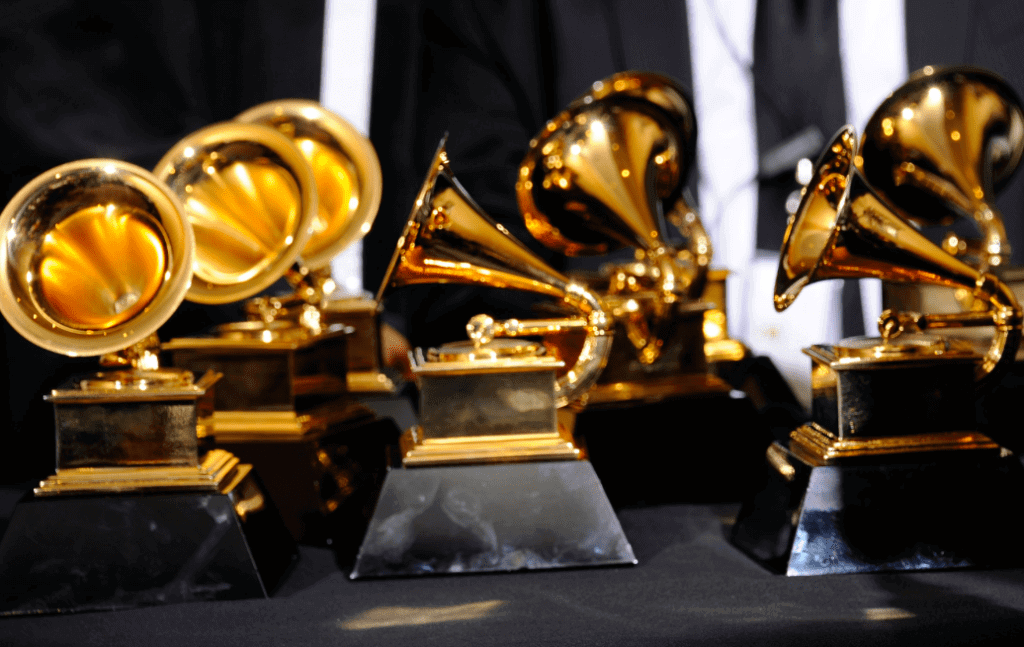 The Grammys is one of the most prestigious celebrations of outstanding achievements within the music industry. As the National Academy of Recording Arts and Science celebrates its 58th edition tonight, we’re taking a look back at the history of the ceremony and some of its past winners. The Grammys will be broadcast tonight on CBS.

It was in 1959 that artists Frank Sinatra, Henry Mancini, Gene Autry, and other leading lights of the time convened at the Grand Ballroom of the Beverly Hilton for a formal awards celebration, while another group of artists held a simultaneous event in New York. It was Christine Farnon, who would eventually become the Academy’s Executive VP, who would be the driving organizer behind that first show.

“As I recall,” she said, “no one objected to dressing black-tie back then, though like so much else, that would change eventually. The Grammy Awards were a formal event from the beginning and very much in keeping with the times.” And so the tradition began.

Held on both coasts, the event was quickly compared to the Oscars and Emmys. And like today, it held many surprises. Frank Sinatra, for example, who led in nominations with six, was repeatedly upset, winning just one, as art director for Best Album Cover for Only the Lonely. It was Domenico Modugno who won the very first Record and Song of the Year for Nel Blu Dipinto Di Blue (Volare) while Henry Mancini won Album of the Year for The Music from Peter Gunn.

The first celebration also marked the Academy’s diversity with winners ranging from the Kingston Trio and Ella Fitzgerald, to David Seville and the Chipmunks (yes, those chipmunks!).

Now, the funny thing about The Grammys 2nd Annual celebration is that it wasn’t actually annual: it would be the only time in Grammy history that two presentations were presented in the same year. It also marked the first televised version of the ceremony, airing on November 29, 1959, and hosted by Meredith Wilson, writer of The Music Man.

That evening’s big winner was Bobby Darin who was named Best New Artist of 1959, while also winning Record of the Year for Come Dance With Me and Best Vocal Performance, Male, for that album’s title track. Other winners included poet Carl Sandburg for A Lincoln Portrait and Ethel Merman tied with Gwen Verdon for Best Broadway Show Album – Gypsy and Redhead, respectively.

And then, another funny thing happened – the 3rd and 4th annual presentations were not televised and instead were celebrated as private dinner ceremonies. The Academy was actually still trying to convince television networks that The Grammys was something that needed to be broadcast. Imagine that!

Once again, the celebration was held on both coasts and Ray Charles emerged as the evening’s big winner, earning his first Grammy for The Genius of Ray Charles. Bob Newhart also won big, becoming the first comedy set to win Album of the Year for The Button-Down Mind of Bob Newhart.

By the time the 5th annual awards presentation came around, the Academy continued its non-televised celebration, creating instead six specials to be aired on NBC called “The Best on Record.” The programs were hosted by Frank Sinatra with guest hosts Dean Martin, Bing Crosby, and Bob Newhart, among others.

“You know, a record is a kind of a weird thing,” said Sinatra. “It’s just a slab with a little hole in it, and yet it can do almost anything for you. It can bring a symphony into your living room… you can make bums out of the artists and artists out of the bums. Now, this is the payoff—it’s called a Grammy. They’re voted once a year by the members of the National Academy of Recording Arts & Sciences, not for selling a million records mind you—you get bread for that—this is for contributions to the art of recording.”

Sinatra also made a historic presentation to Bing Crosby, honoring him with a lifetime achievement award. “This is going to look very good on a mantle that has been conspicuously barren of late,” he said.

On its first decade celebration, the Grammy Awards was on the forefront of diversity with its winners. For example, Senator Everett M. Dirksen won Best Spoken Word, Documentary or Drama Recording for Gallant Men, while Elvis Presley won Best Sacred Performance for How Great Thou Art. Boris Karloff won Best Recording For Children for Dr. Seuss: How The Grinch Stole Christmas while the 5th Dimension swept away the ceremony with four wins for their rendition of Jimmy Webb’s Up, Up and Away which included Record of the Year, Best Performance by A Vocal Group, Best Contemporary Single and Best Contemporary Group Performance.

There was also a little band by the name of the Beatles who won Album of the Year and Best Contemporary Album for Sgt. Pepper’s Lonely Hearts Club Band. And finally, this decades-long celebration also marked the event being celebrated simultaneously in Chicago, Los Angeles, Nashville, and New York.

58 celebrations later, we’ve seen the positive impact this accolade has on artists, emerging, old, and new. Nielsen reports that “Even artists who enjoy huge levels of sales, streams, and airplay can find new audiences and realize significant increases as a result of the Grammys. “When it comes to engaging music fans, the Grammy telecast is without peer,” says David Bakula, SVP of Industry Insights for Nielsen Entertainment. “The Grammys continue to be a tremendous driver of awareness and discovery. This is clear in the increases that we see in sales, streaming, social followers and web activity.”