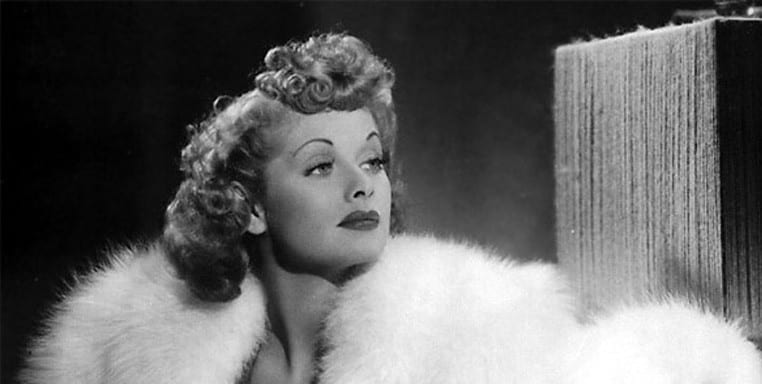 Lucille Ball reigned as the queen comedienne of sitcom television in the 1950s and earned thirteen Emmy nominations, winning four of the prestigious awards over the course of her long career. She famously pushed boundaries with an interracial marriage that would come to charm millions of Americans. Lucille Ball was a major Hollywood player for decades, both on- and off-screen as the first woman to run a major production company, Desilu. Syndication of I Love Lucy and the actress’ trademark red hair has made her the most recognizable face of the 1950s, even today.

Lucy’s rise to stardom was slow. She took chorus work on Broadway as a young adult but had difficulty keeping a job. She was a struggling New York actress for many years, working as a model to make ends meet. Eventually, her attractive looks won her some small roles in studio pictures, and she would eventually become known as “Queen of the Bs” for her parts in B-movies. 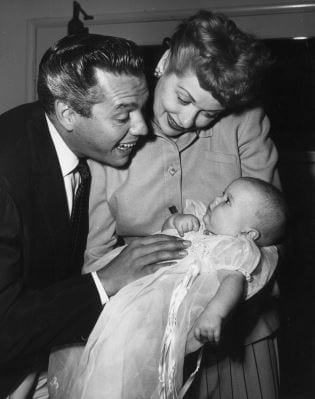 The actress met Desi Arnaz in 1940 on an RKO set and eloped with him after a six-month-long passionate romance. She wore a little brass ring from Woolworth’s, unable to wait for jewelry stores to open in the morning. Their twenty-year marriage was tumultuous, and their conflicting schedules and geographical distance strained the relationship for the first ten years. Working together on I Love Lucy revived the marriage for a while, but it wouldn’t save it. The show was their greatest success to date, but their relationship was crumbling. Although together they displayed a keen eye for business, Desi’s extramarital affairs and excessive drinking wore on Lucy. They worked at their marriage for the sake of their two children, but their egos and her humiliation at his infidelity eventually led to the couple’s divorce in 1960, devastating not only the pair but also their millions of fans.

In 1953, the House Un-American Activities Committee released information that Lucille Ball had registered as a member of the Communist Party many years prior, in 1936. Despite the tense period in history, Lucy and Desi managed to deflect the allegations relatively easily, explaining to the Committee and the press that Lucy had only registered as such to appease her Socialist grandfather. Desi joked that “The only thing red about Lucy is her hair, and even that’s not legitimate.” Lucille Ball’s career dodged a bullet, and after the end of I Love Lucy and The Lucy-Desi Comedy Hour, her career continued with many guest appearances, The Lucy Show, and Here’s Lucy.

Lucille Ball has a star on the Hollywood Walk of Fame each for films and television. Shortly following her death, George H.W. Bush granted her the Presidential Medal of Freedom, and her career has been recognized through various lifetime achievement awards. She is widely considered the greatest television actress of all time.