Making a Dent to Further Education at Columbia College

Making A Dent -As guests waited, they sipped on mojitos and sangrias before making their way into the main room with its expansive buffet spread filled with skirt steak, spicy shrimp and Spanish chorizo sausage skewers, empanadas and other selections. 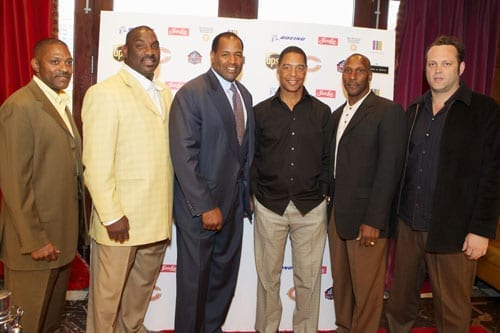 The anticipation and excitement ramped up as Richard made his way through the crowd of 400, which included Chicago’s business and community leaders, friends, fans and supporters, all offering their congratulations.

Ryan Baker, the lead sports anchor for CBS Channel 2, acted as the evening’s emcee. When Richard took the platform he expressed his overwhelming gratitude to everyone who had supported him throughout his career. Heartfelt tributes were given by friends, former teammates, college coach, and mentor, Coach Joe Gilliam Sr. and daughters, Mary and Sarah.

Approximately $120,000 was raised through the event and will benefit The Make a Dent Foundation’s scholarships in sports management program at Columbia College and community economic development programs. For more information please visit www.makeadentfoundation.com
Editor’s Note:
The event was produced by my good friend, Margaret O’Connor and her company, MarCon Communications.