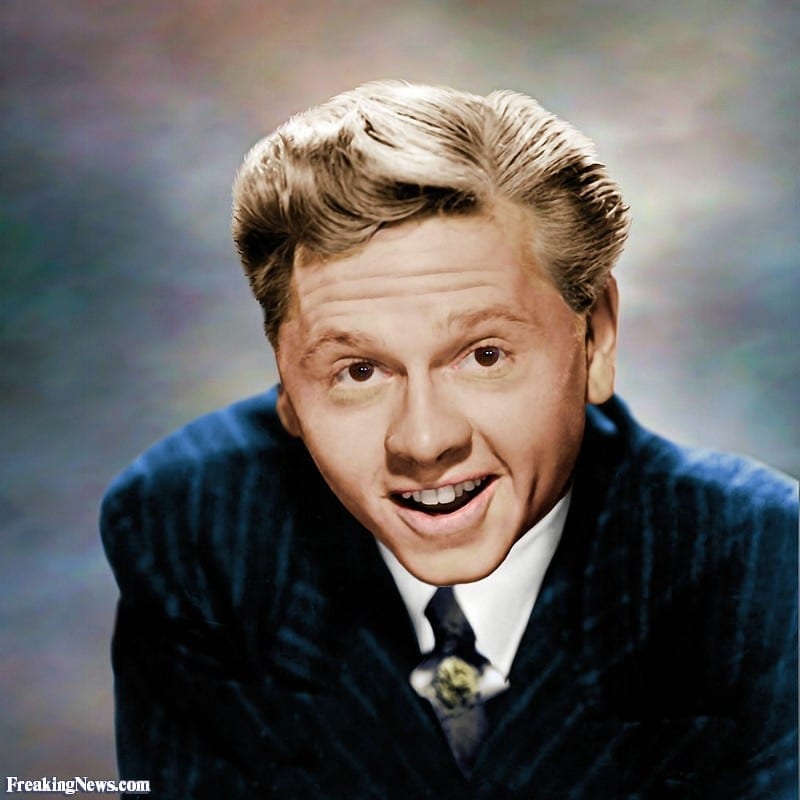 Mickey Rooney was movie legend who literally crawled on stage when he was just 17 months old, Mickey Rooney clearly an entertainer extraordinaire: singing, dancing, acting, even playing piano or drums were all second nature for this natural-born actor; there was nothing he couldn’t do.

Rooney is probably best remembered for his Andy Hardy roles in the 15 Hardy Family movies, (from 1937 – 1949), which made over $75 million. An astonishing sum, considering the time period and cost of movies: .25 cents for a movie ticket during the Depression years following the stock market crash of 1929.

In 1939, (Hollywood’s greatest year) he starred in “Babes in Arms,” the first of many musicals he made with Judy Garland. According to numerous film critics, Rooney possessed the unique, talented qualities of Hollywood’s top talent: elements of Humphrey Bogart, Jimmy Cagney, and Clark Gable were all evident in his stage persona. ”

Although he was a dynamic actor with terrific stage presence, his personal life had more ups and downs than a roller coaster; having married eight times and haphazardly spending more than the $12 million he earned by the time he was 40 years old, which led to a reputation of being an eccentric and a reckless gambler.

Yet his remarkable screen success could not be denied: voted the #1 box office draw three years in a row: in 1939 (over Tyrone Power), in 1940 (surpassing Spencer Tracy), and in 1941 (topping Clark Gable.)

Born into a show business family on Sept. 23, 1920, Joseph Yule Jr. (Mickey Rooney) turned down an offer of $5.00 a day to appear in Hal Roach’s “Our Gang” comedies for a musical revue paying $50 a week, and soon was compared to MGM’s high priced ($2,500 a week) Freddie Bartholomew. However, pairing him with Judy Garland was MGM’s brilliant, calculated decision.

A challenging turning point developed at age 28 when Mickey suddenly realized that childhood movie roles were no longer an option and dramatic, adult roles were a rare commodity. Other highlights of his amazing career include marrying starlet Ava Gardner in 1942, two years later starring in “National Velvet,” (a breakthrough role for Liz Taylor) and later that year being drafted into the army.

Rooney’s first Emmy nomination happened in 1957, starring in Rod Serling’s “The Comedian.” Not to be overlooked was his much-publicized appearance on the Tonight Show with Jack Paar in 1959. After appearing in a string of average movies in the 1960s, the spotlight returned to Rooney in the ’70s as he gave up drinking and became a born-again Christian.

Much to everyone’s surprise, his Broadway debut did not occur until age 59, when he co-starred with former MGM dancer Ann Miller in “Sugar Babies,” for three successful years which earned him a Tony nomination.

A magnificent milestone was achieved in 1983 when he was awarded an honorary Academy Award, acknowledging his 60 years of performing in a variety of roles. In the twilight of his career, this veteran of 200 movies was once quoted: “Growing up in vaudeville made me cognizant of the need to have fun at what you’re doing. You can’t get it done well without it being fun …”

There is no doubt we have lost a true Hollywood legend of epic proportions; his star will forever shine brightly on Hollywood’s walk of fame. Fans across the U.S. and around the globe will be mourning this monumental actor for years to come.