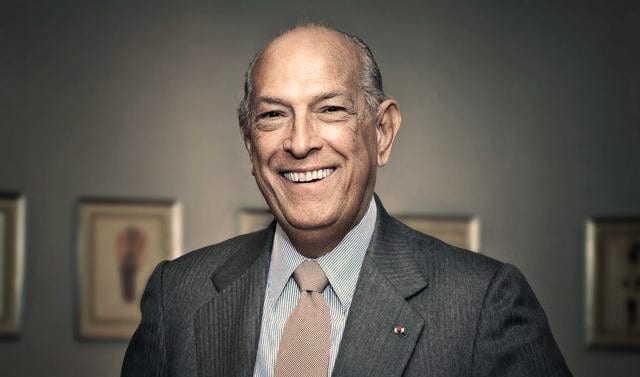 Oscar De la Renta was an artist. Not in the way that commercial designers are “artists.” The Dominican native was an actual artist. A painter, an illustrator… a designer. And he transformed women into works of art. They were the canvas upon which he created luxurious lines, stunning silhouettes, colorful palettes, and beautiful movement. After entering the industry, he was standing at its pinnacle in a matter of only a few years. Impressively, he managed to grow his fashion business wildly while still keeping it in the family. Family values were always important to the man— he said it was because of his Latin blood. And with the kindness of a father, he treated both First Ladies and doormen alike. A man of the strongest work ethic, he kept busy until the end. On October 20th, Oscar de la Renta lost his battle with cancer, but his legacy will live on for as long as women love to feel beautiful.

Oscar de la Renta was born in the Dominican Republic in 1932 and was the only boy among six sisters. From the other boys in their neighborhood, Oscar’s mother knew he was different. In a 2005 interview for New York magazine, De la Renta recalled of his 7-year-old self, “I thought if I woke up very early, I could collect the dewdrops of the flowers, I could make perfume.” At a young 17, he left Santo Domingo for Madrid to study painting. While there, the fashion sketches he created for newspapers gained the attention of Cristóbal Balenciaga, who hired De la Renta and trained him as a protégé. From Madrid, he moved to Paris and eventually New York to work with Elizabeth Arden. His charming, gentlemanly demeanor and position at Arden won him many influential friends, magazine editors among them. He was soon prepared to launch his own line. Rapidly following the release of his first ready-to-wear collection, the designer was creating looks for society’s elite class of ladies, adorning them with silk, ruffles, and romantic style.

“I think that probably what has made my business so successful today is because the most important consumer is now the professional woman… [A] woman knows that she can look great, that being a woman is an asset. And this is what I have always known. And so, perhaps, this is my time.”

Eventually,  Oscar De la Renta would debut a perfume and home collection as well as luggage, eyewear, jewelry, and accessories, expanding his brand while never relinquishing control of his company. Both his wives, Francoise de Langlade, who he married in 1967 and lost to bone cancer in 1983, and Annette Engelhard Reed, who survives him along with his adopted son Moises, were important inspirations and critics of his work. They were the women behind the man, so-to-speak. Eliza Bolen serves as a vice president of her stepfather’s company while her husband, Alex Bolen, acts as CEO. De la Renta has kept his brand under his family’s control, resisting offers by investors, while achieving desirable growth. This growth is due in part to a shift toward more youthful styles. Though Oscar De la Renta ’s legacy is indisputably solid, whether or not the company will sustain without him is still to be seen.