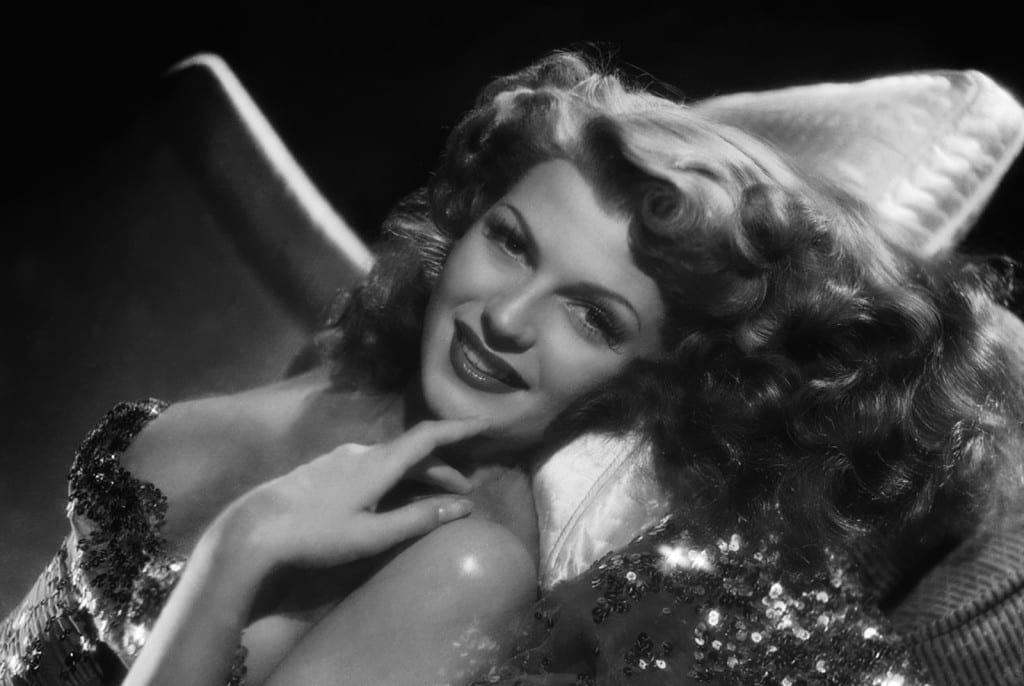 Rita Hayworth is a Brooklyn native who was born of Spanish descent in 1918. She came from a family of professional dancers and actors, and she was encouraged to pursue these talents at a young age. Her father preferred her to be a dancer, and her mother wanted her to become an actress. Apparently, her desire to impress her parents led to her becoming successful and famous in both dance and acting. Her family’s desire stems from Antonio Cansino, her grandfather, and world-renowned Spanish classical dancer.

Rita playfully recalls, “From the time I was three and a half… as soon as I could stand on my own feet, I was given dance lessons.” By the age of six, she was performing publicly, and by eight she was in her first short film La Fiesta. This lead to the entire family moving to L.A. and her father opening up his own dance studio and teaching Hollywood stars like James Cagney and Jean Harlow. After playing dozens of small roles in minor films, she was finally cast opposite of Cary Grant in Only Angels Have Wings. This was the catalyst that sent her into stardom, leading to numerous large roles with multiple studios.

While traveling to Cannes, she met Prince Aly Khan, and the two fell in love and were quickly married and with a child. The relationship did not last long due to the couple’s cultural differences and the flamboyant life of the Prince. Soon after the divorce she returned to Hollywood and started to work on a comeback. Her relationship with Columbia Studios proved to be quite successful but also very turbulent. Often she rejected films and scripts and even ditched her contact during her marriage to the prince, all of this very rare for that time.

Rita had a long history of alcohol abuse, which led to not only a decline of her health but also in the success of her career. After years of deteriorating health and unknown mental health status, she was diagnosed with Alzheimer’s. She was eventually court-ordered into the care of her only daughter, Princess Yasmin Khan, and within a few years passed away due to complications of Alzheimer’s. Ronald Regan famously said, “Rita Hayworth was one of our country’s most beloved stars”. She was one of the largest stars of the 40s and paved the way for a woman to become wildly successful on their own terms.

Watch Rita and Fred dance the night away in this classic scene.

One of her most infamous husbands was Prince Aly Khan. Their romance was widely covered by media because of their massive shared fame. She had numerous husbands including Orson Welles, Dick Haymes, and James Hill.

Rita was a glam icon and one of the most famous performers of the 40s. Her style and talent will live on for centuries to come.