On a brilliant suggestion from accomplished Hollywood director Sydney Pollack in 1981, the Sundance Film Fest moved from Salt Lake City to Park City, Utah and commenced activities in January instead of September. The idea was that the film fest would attract more attention from Hollywood and the general public if it took place at a significant ski resort during the winter instead of an ordinary location in the summer. 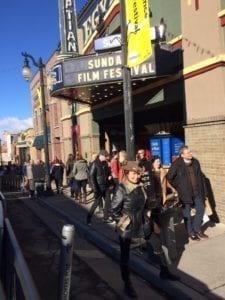 Founded by Sterling Van Wagenen in August of 1978, Utah resident and veteran actor Robert Redford became the festival’s first chairman. Besides Redford’s popularity, which propelled the event’s success, the Hollywood film making community was anxious for more events that would celebrate movies that were made in the U.S. After all, the only other place doing this at the time was in Dallas with the U.S.A. Film Fest.

Over the course of time, the success and popularity of the Sundance Film Fest grew, as evidenced by its attendance of 46,731 in 2012. The main goal of the film fest from the very beginning was to promote, highlight, and create an atmosphere whereby Independent filmmakers compete against each other. This year’s Sundance Film Festival (from Jan. 22nd to Feb. 1st) carried on a proud tradition which has grown from its small budget, humble beginnings to its current Hollywood media extravaganza status.

In the spotlight this year was Me and Earl and the Dying Girl which captured top prizes: winner of the Grand Jury Award and the Audience Award in the American drama category. A standing ovation erupted after its premiere, and a bidding war among distributors resulted from its success. Me and Earl… chronicles the story of two teenage boys, their love of classic movies, and how they cope with a terminally ill girl. Other winners included The Wolfpack, awarded the Grand Jury prize for an American documentary. In Wolfpack, six brothers are essentially held captive in their father’s public housing apartment, with movies being their only outlet to the outside world. Not to be overlooked in the World Cinema category was Slow West, starring Michael Fassbender which won for best feature and documentary winner The Russian Woodpecker which expertly summarized the Chernobyl disaster.

For me, one film stood out among the rest. Throughout my years in the industry, I have been fortunate to make a few very good friends, one of which is a local filmmaker and director Gabe Polsky, whose documentary, Red Army, chronicles the “once-unbeatable Soviet hockey team and the link between sports and politics.” The terrific film has been widely reviewed as an entertaining and informative hit that humanizes a once-vilified team of athletes. We will be sure to see him at the Cannes Film Festival in May and in the upcoming years.

Indeed, a fledgling idea that started 37 years ago has flourished into an outstanding tradition (as well as a major Hollywood event) that only becomes bigger and better every year; developing new, undiscovered talent who will one day make their mark on Hollywood.