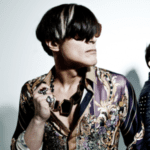 The music collective Cary NoKey recently gave a glam-packed performance at the 35th annual NorthHalsted Market Days. Lead singer Grammy Award-winning Rob Fusari, now known as 8bit,  along with two high energy backup dancers, brought some much-needed excitement to the Boystown crowd. He dazzled everyone with a cover of the Connie Francis hit, “Where The Boys Are“, and his new single.”B Who U R” which is available on iTunes.

Cary Nokey is a new take on the club nightlife scene and is inspired by “high-intensity electronic dance music [that] intersects with emotionally charged rock” Fusari helped Lady Gaga develop her persona and launch her debut album “The Fame”, which sold over 14 million copies. He also worked with other chart-topping stars like Beyonce, Britney Spears, and Whitney Houston. Referring to his newest project, Cary Nokey recently said, “you’re never going to get one thing“, and that you can expect lots of sequins, dance-inspiring beats, and a ton of energy.

Check out the official music video to Cary Nokey’s “Incredible”

Fusari has worked with countless legendary artists including Beyonce, Britney Spears, Whitney Houston, Jessica Simpson, Will Smith.  He is best recognized for discovering pop icon Lady Gaga. His discography holds countless Billboard hits, including Destiny’s Child’s “No No No” and “Bootylicious”, Whitney Houston’s “Love That Man”, Will Smith’s “Wild Wild West” and Lady Gaga’s “Paparazzi”, which he also co-wrote, which subsequently lead to being honored with a Grammy and the Ascap POP award. He has recently been featured in Billboard magazine’s Top 10 Songwriters in the world.

A New Jersey-born child prodigy, and competitive piano player, Fusari performed at the prestigious Carnegie Hall in NYC at only 8 years old. Although classically trained, he loved classic rock and roll…Beatles, Led Zeppelin, and Pink Flloyd. But it wasn’t until he saw Prince live at the Roseland Ballroom, which changed his artistry forever.

At age 22, he began songwriting and couldn’t stop. Recording his own tracks, he eventually worked with legend songwriter Irwin Levine, and became the producing partner with Vincent Herbert. It was during this time, which he created his first #1 hit single, “No, No, No” which launched Destiny Child’s career.  It was years later that Rob introduced Vincent to Stefani Germonatta aka Lady Gaga at Interscope Records.

A multi-instrumentalist, Fusari plays keyboards, guitars, keytar, and drums with great ease and individuality that only an experienced music producer yields, he is able to communicate through music unlike anyone else. Known to spend days & late hours collaborating with topline writers, and singers, he lives and breathes for music; “Music is like a drug”, says Fusari and blatantly admits that he never had a Plan B for his career– for him it was only music.

In 2013, he introduced “The World of Cary Nokey” with his alter ego, “8”. Introducing a new music genre of Superglam & SuperGrit through a theatrical musical spectacle in the NY underground scene and fashion world. Touring in both the US and Europe.