Kim Davis : No One Who Supports the Constitution Should Support Her 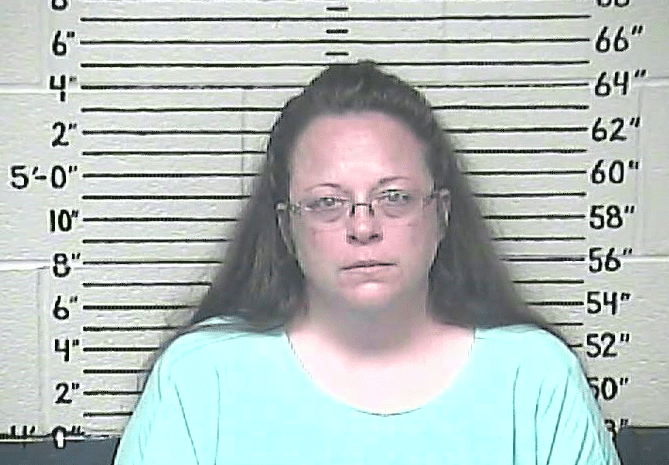 Kim Davis, an obscure Kentucky county clerk, made headlines in recent weeks for her refusal to issue marriage licenses to same-sex couples. Her justification is avowedly faith-based, claiming that to issue the licenses would be repugnant to her Christianity, and that she is protected under the Constitution’s injunction against discrimination on the basis of religion.

There is hardly a need to rehash the events that followed, but in brief she was hailed as a hero of religious values by many conservatives. A few Republican presidential candidates have even come out in vocal support; upon released from jail after being found in contempt of court, she was greeted by a rally headlined by Mike Huckabee.

The subjects of whether the United States actually discriminates against Christians (it doesn’t) or whether same-sex marriage is immoral (it isn’t) have been discussed in sufficient detail elsewhere. What is most interesting about this case is the question it raises about the actions of public officials when they defy the law.

Same-sex marriage, whether people like it or not, is the law of the land. The Supreme Court has said so. Conservative activists and politicians are welcome to try to drum up the support to impose a constitutional amendment. Otherwise, they have no recourse. That is simply the way law works.

Yet Huckabee and others seem to have decided that Kim Davis was right to openly and flagrantly reject the law on moral grounds. That is the real issue at stake in this debate: should public officials, elected or otherwise, be allowed to refuse to enforce laws.

The answer to that question, in any free society committed to the rule of law, must be no. Wicked laws can be fought against, but public officials, by definition, are agents of the law.

Imagine any other situation in which a public official would refuse on religious or moral ground to do their job. For example, would any politician be willing to stand with a clerk who refused to issue licenses to a multi-racial couple, even if their opposition to miscegenation was a deeply held religious belief? Doubtful.

The point is this: all people must be treated equally before the law and the law must be applied fairly and consistently. If an officer of the law is going to apply his or her own beliefs to supersede the law, then that officer is acting illegally and immorally. No one is making Kim Davis serve as county clerk. She has every right and perfect freedom to resign in protest to the law. She does not have the right to ignore whatever law she disagrees with.

And that’s what is so distressing about the conservatives coming out in support of Kim Davis. These are the same people who have been attacking President Obama for ignoring the law and using executive orders to get around Congress and numerous statutes.

True supporters of the Constitution and the rule of law should denounce Kim Davis, not embrace her. She represents the very capriciousness that has eroded the rule of law in this country. Whether you are on the right or left, this is wrong.