Winchell Thoroughbreds and Three Chimney’s Gun Runner was the clear favorite to take home the $1.2 million purse at the 90th running of the Whitney Stakes at Saratoga Springs, New York this year. This fact, however, did not diminish the excitement of the race. The vibe at the racecourse was intoxicating to all of us there!

Gun Runner had still not taken the lead by the halfway point of the race. The leader during the first half mile was the pacesetter Cautious Giant. Gun Runner remained two lengths behind. Then, with a half-mile until the finish, there was a change. Both horse and jockey, Florent Geroux, settled in and Gun Runner took control of the race. Cautious Giant was left behind as Gun Runner took the lead and finished the 1 ⅛ mile race with a time of 1:47.71. This fourth straight win for Gun Runner is even more impressive after taking into account he crossed the finish line with Cautious Giant’s horseshoe caught in his tail.

Said Geroux of the race, “My horse broke super sharp today from the gate,” said Geroux. “I could have gone to the lead if I wanted to, but I just stayed cover until the five-eighths pole and from there the race was pretty much over. My horse was just on cruise control from all the way from there and then I just gave him a tap around the 1/8 pole to make sure he stayed focused but there was not even a need for that.”

Gun Runner is just another in a long line of Whitney Stakes winners through history. The race has been taking place for 90 years and is named after the Whitney family, who are prominent supporters of the sport of Thoroughbred racing. The Whitney family have had more stakes winners than any other family in the history of racing in the United States. The face of the family today is Marylou Whitney, who is as much an icon as Saratoga Springs itself.

Known as the “Grand Dame of Saratoga,” Whitney is a living legend in Saratoga. At 91 years old, the Whitney Stakes has always been a part of her entire life. And as much as racing in Saratoga Springs has shaped her, she has shaped Saratoga Springs. Not only has she had a presence in Thoroughbred racing, with victories from her homebred Bird Town in the 2004 Kentucky Oaks and a victory by Bird Song in the 2004 Belmont Stakes, she has also been a huge force in helping to rejuvenate Saratoga from the weakest of the New York Racing Association’s three tracks to the thriving community it is today.

“Marylou was very involved in maintaining the image of Saratoga as a great place to live in or visit,” said Joe Dalton, president of the Saratoga County Chamber of Commerce from 1970-2010. “She was always one of the best promoters of Saratoga. She did a lot to create an image of class for Saratoga that started to come into full effect in the mid-1970s.”

Aside from being the only woman to own and breed a Kentucky Oaks winner, Bird Town, Whitney is also known for her philanthropic work. This includes the foundation of the Markey Cancer Center in Lexington and creating the Hoofprints Walk of Fame outside Saratoga’s clubhouse entrance. This Walk of Fame honors some of the great champions who have raced there. She continues to be a driving force in the Saratoga and racing communities to this day. 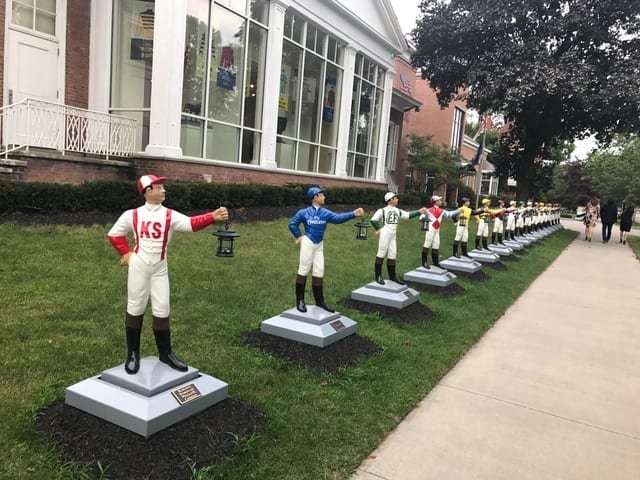 In 2015, she was honored as Churchill Down’s “First Lady of the Oaks,” a title celebrating special individuals who champion women’s causes. Aside from her millions of dollars of support and advocacy for cancer research and treatment, Whitney has also been an ardent supporter of the arts and has sought to improve the quality of life for the workers at America’s racetracks.

Truly, Marylou Whitney and the Whitney Stakes will be forever intertwined in racing history, as both are irreplaceable aspects of life in Saratoga Springs. Says Whitney of the place she has helped restore to glory, “I think Saratoga Race Course is the most wonderful place to be at the summer. When I’m here, I’m very happy.” I agree as I personally enjoy the time I spend at the Saratoga Springs Race Course, especially The Whitney Stakes.