The fabulous Drake Hotel was the center of attention for the 14th annual PAWS Chicago’s 14th Annual Fur Ball as nearly 700 dog enthusiasts and their trusty companions showed up in support of a very noble cause.

Canines of every breed, size, shape, and pedigree were well represented, ranging from a mighty English Bull Mastiff to a petite Maltese. Proud dog owners and their pets, all in formal attire, paraded through the elegant lobby of the Drake Hotel, which was appropriately decorated for the holiday season with a 24-foot Christmas tree.

Raising significant funds (more than $1.6 million) for an amazing organization was even more significant this year, as PAWS pursues its new Medical Center Expansion project.  This innovative facility will, “treat animals suffering from contagious but treatable illnesses, including upper respiratory infection, pneumonia, parvovirus, calici, panleukopenia, ringworm, and mange.” Most supporters of PAWS don’t realize this eye-opening statistic: 75% of all incoming animals need uncommon medical treatment outside of the usual, routine care-giving.

All dogs in attendance were pampered with all the convenience and comfort that only the prestigious Drake Hotel could provide, from a luxury pet spa to their very own buffet; not to mention the traditional walk down the red carpet, complete with photo opportunities with their owners.

Helping PAWS Chicago’s 14th Annual Fur Ball reach their financial goals were their silent and live auctions. An exciting live auction took place in the Grand Ballroom featuring some extraordinary prizes such as dinner with the stars of the Fox TV show “Empire” and attending the L.A. movie premiere of “Point Break.” Live auction items in the Gold Coast Room included an exotic vacation in the Dominican Republic, a private yacht for the 2016 Chicago Air and Water Show, and dinner with former Bears coach Mike Ditka. Not to be overshadowed by its public counterpart, the silent auction had some unique items on display in the Walton Room, first among them a personal visit with David Gilmour of Pink Floyd, including four tickets to his April 12th concert in New York City, round trip airline tickets, and accommodations at the Park Hyatt Hotel.

A new element to the PAWS Chicago’s 14th Annual Fur Ball was the after-hours party in the exquisite Palm Court, where guests mingled and socialized with man’s best friend, making this special event even more special. 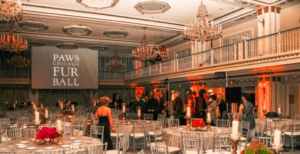 No doubt about it, this particular soiree was truly outstanding in every dimension from PAWS Chicago’s 14th Annual Fur Ball, where the three principles of their mission statement are: to build No Kill communities, to end the overpopulation of homeless animals, and to transform animal welfare by setting higher standards.

Congratulations to Paula Fasseas, her dedicated staff, generous sponsors (A. Marek Jewelers, the Chopper Group) and the countless volunteers who made this magnificent pooch party possible!