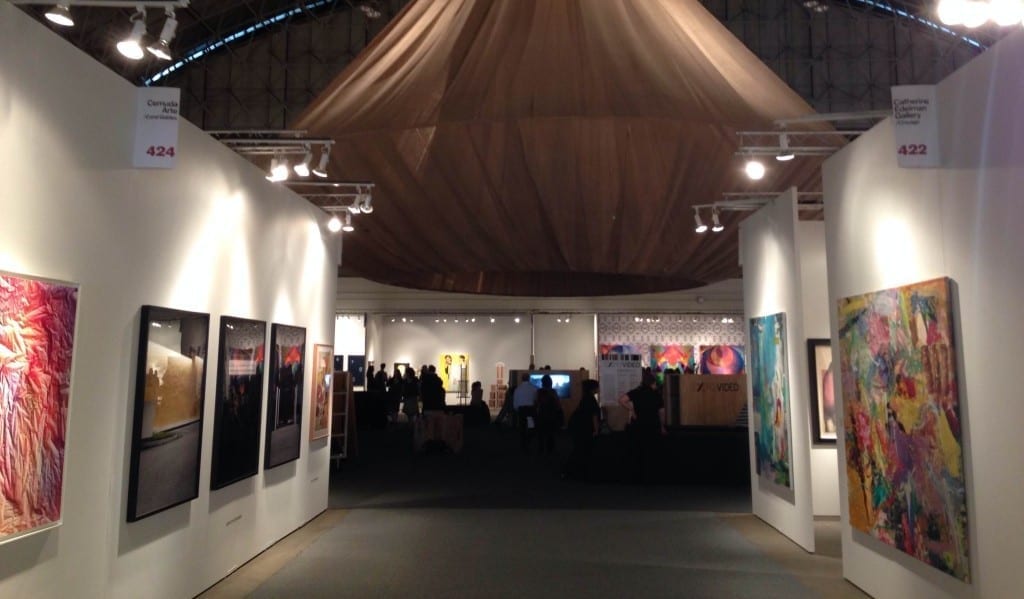 Art connoisseurs from all over the world converged on Navy Pier on Sept. 18th as the Women’s Board of the MCA was delighted to once again host Vernissage – the opening of the Art Expo Chicago.

Since 1982, the MCA Women’s Board has opened Chicago’s International Art Fair, and over the last 32 years, it has developed into a major cultural affair… Vernissage in French means “varnishing day,” which indicates the excitement and expectations surrounding an art exhibit’s opening. According to MCA Pritzker Director Madeleine Grynsztejn, “We are once again thrilled to partner with Expo Chicago in order to kick off the fall arts season in Chicago and welcome the rest of the world to our incredible city.”

Artistic energy was buzzing in the atmosphere as over 3,000 people crowded into Festival Hall in the upper level of Navy Pier’s East end on a beautiful Sept. afternoon on the shore of Lake Michigan.

As the highlight of Expo Art Week, (Sept. 15 – 21) this year’s Vernissage event showcased a global collection with prominent galleries representing 17 countries and 43 cities, for a total of 140 galleries.

Talented artisan’s creations of every size, shape, and color were proudly on display throughout the spectacular Festival Hall; no two gallery’s artwork were the same, as New York outclassed every U.S. city with 55 galleries, while Chicago exhibited 19 galleries.

From the moment we walked in, we were treated like royalty at the Northern Trust V.I.P. Collector’s Lounge while waiters and waitresses circulated through the art loving crowd offering Angus steak sliders and other delicacies. Also on the premises throughout Festival Hall were menu items from restaurants such as Carnivale, Coco Pazo, Eli’s Cheesecake, Harry Caray’s, etc. Not to mention never ending lines of customers waiting for a complimentary Vienna Beef hot dog. Congratulations to MCA Pritzker Director Madeleine Grynsztejn and Expo Chicago President Tony Karman for coordinating an extraordinary art work presentation, showcasing masterful pieces and imaginative creations from around the globe ….