Iowa Caucuses: One Last Ride Before 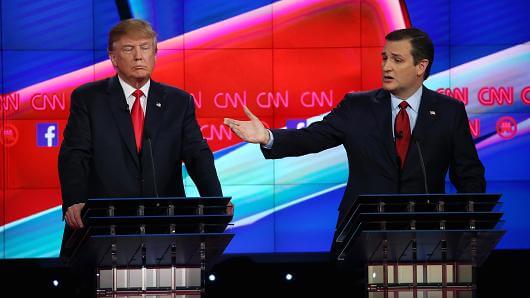 With mere days before the Iowa Caucuses, Republican candidates are still vying to position themselves for the fight after the first votes are cast. Some are aiming to win and gain momentum, while others are simply trying to survive to fight on into the primary season.

Tonight’s debate represents the last chance many of these candidates have to shift the scales in their favor. Here are a few things to think about while you’re watching:

A debate without The Donald

Donald Trump’s public spat with Fox personality Megyn Kelly (who will be reprising her role as a moderator tonight) has led to the astonishing decision to actually skip the debate. A presidential debate without the far-and-away frontrunner is an awfully strange thing. Trump has said that he feels Fox is not treating him fairly, a statement that has many eyes rolling.

Even Fox itself, usually mum about specific candidates, has opined that if Trump is put off by a perceived unfairness of a conservative journalist, then he may find it difficult to work with Vladimir Putin or the Iranians, who are not known to be the fairest or most even-minded of negotiators.

Watch for candidates trying to score easy ridicule points off Trump’s temper tantrum. For once, they may actually succeed in making something stick.

Cruz in the crosshairs

With Trump out of the game, Cruz will be center stage. Formerly leading in Iowa, the Texas senator is now trailing Trump. He will undoubtedly seize the opportunity to attack the frontrunner and try to win back some of the momenta.

Yet the position of frontrunner can be fraught with peril. Cruz will likely find himself the target of a lot of the criticism from his opponents, especially from Marco Rubio, who is hoping to break out from the middling pack to tilt with the two leaders.

If Cruz can weather the storm he may yet unseat the pouting Trump in Iowa. But if he stumbles, he will fall hard.

A moderates’ knife-fight at Iowa Caucuses

This election has been a party to a rare spectacle: While the conservative faction of the Republican Party has been coalescing around two candidates, the Establishment wing has continued to be uncharacteristically fractured and fractious. This is a mirror image of the traditional dynamics of GOP races, and the party seems to be at a loss as to how to deal with it.

Rubio, John Kasich, Jeb Bush, and Chris Christie have been directing much of their fire at each other rather than at either of the conservative frontrunners. This makes a certain degree of sense, as each hopes to become the moderate Republican in the race. The problem is that the longer they fight, the less chance there will be of any of them rising from the ashes.

Look for a lot of statements about beating Hillary Clinton in the general election. It won’t matter much if none of them can get their campaigns off life support.

Goodbye to the no-hopers

For better or worse, this will probably be the last time we see a number of the candidates in the debates. Rand Paul managed to claw his way back onto the primetime stage, but his numbers continue to wallow and any clear path to the nomination (or even looking competitive) has long since evaporated. He will likely bow out after Iowa and New Hampshire to focus on the more realistic goal of keeping his Senate seat.

Mike Huckabee and Carly Fiorina will also be taking their last ignominious bows before long. In truth, they’ve accomplished what they probably set out to do from the start: Sell books, get TV deals, and maybe a job in the next administration.

Somewhat charmingly, Jim Gilmore was invited back to the undercard debate. I genuinely thought he had dropped out months ago, but apparently, he will be showing up.